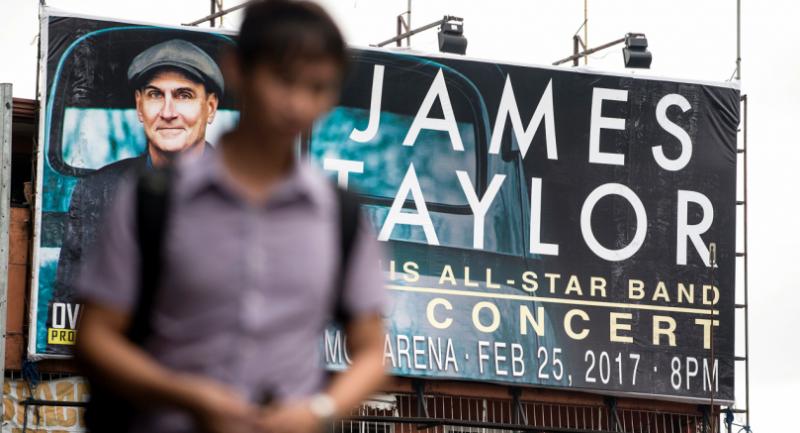 A man walks past a billboard promoting a planned concert by US singer James Taylor in Manila on December 21, 2016./ AFP PHOTO

"I don't think of my music as being particularly political but sometimes one is called upon to make a political stand," the US star said in social media posts on Twitter as well as on his Facebook page.

"For a sovereign nation to prosecute and punish, under the law, those responsible for the illegal trade in drugs is, of course, understandable, even commendable," he said, calling drug dependence a "scourge" and a "worldwide problem".

"But recent reports from the Philippines of summary executions of suspected offenders without trial or judicial process are deeply concerning and unacceptable to anyone who loves the rule of law."

Duterte, a fiery populist provincial politician, was elected by a landslide earlier this year largely on a vow to 100,000 criminals.

Police or suspected vigilantes have killed more than 5,300 people since July, but the government rejects the allegations of extrajudicial executions and insists those killed by police had resisted arrest and fought police.

Taylor, 68, rose to fame in the 1970s for writing and performing sensitive songs such as "Fire and Rain" and "You've Got a Friend" and has won five Grammy Awards over his long career.

In recent press interviews he has openly discussed his recovery from heroin addiction in his teens, just before he became globally famous.

De Guia said Taylor was the first foreign performer he is aware of to have cancelled a Philippine concert over the killings, and hoped he would be the last.

"As far as we're concerned we're pushing through with the others," he said.

Taylor was scheduled to have played in Manila on February 25 next year as part of a foreign tour. He said his Manila boycott would not affect the Hong Kong, Singapore, Australia and New Zealand legs of his tour.

Asked to comment on Taylor's stand on the drug-related killings, de Guia said: "This is a very sensitive issue and I don't want to say anything more."