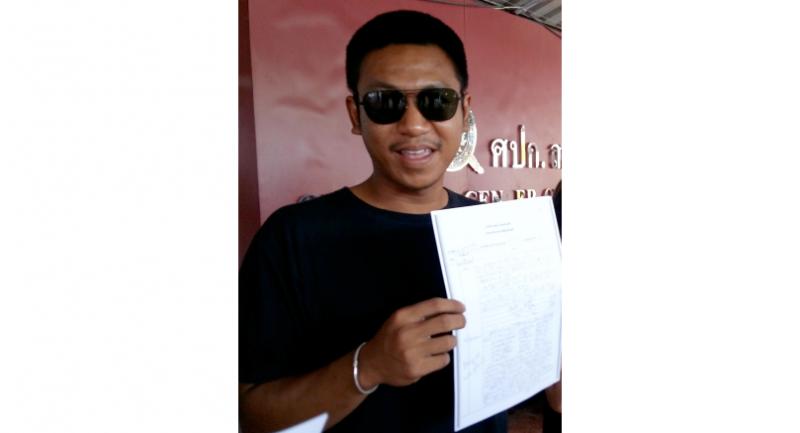 THE KHON KAEN Provincial Court yesterday revoked the bail granted to a student activist who was arrested for sharing a controversial BBC Thai article on Facebook.

On December 3, Jatupat “Pai Dao Din” Boonpattararaksa was charged with violating the lese majeste law as well as the Computer Crime Act before being released on a Bt400,000 bail the following day.

However, he was taken into detention again yesterday as the Provincial Court ruled he had broken the agreement to not get involved in drugs, tamper with evidence or cause damage after being released on bail.

The court’s decision followed a petition filed by an investigator from Khon Kaen Police Station, saying that Jatupat continued to incite the public via social media and could disrupt evidence if left unattended.

One instance was his Facebook status accusing an unnamed authority of “only requesting bail”, an act, the petition said, ridiculed the authorities. The activist has also not removed the controversial article from his Facebook wall, it said.

The activist has a record of violating national security, including committing lese majeste in this particular case, the petition added.

However, Teerapan Pankeeree, a lawyer overseeing Jatupat’s case, said the activist actually complained about the large sum required for the bail guarantee. “He said this amount could have been used to bail out three of his fellow activists who were arrested ahead of the referendum period,” Teerapan told The Nation. “But the bail was not approved.”

Teerapan and another lawyer, Krisadang Nutcharat, requested that the court consider releasing Jatupat on bail, as he had only expressed his opinion and was not disrupting any evidence. Detaining him would also prevent him from sitting for his university exams next month, they reasoned.

The court, however, turned down the request saying it had no reason to change its decision.

The lawyers plan to take the case to the Appeal Court Region VI today, Krisadang said.