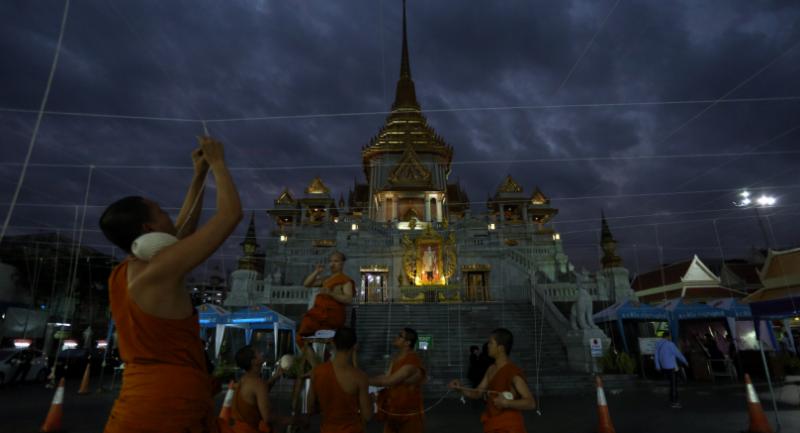 THE government has banned the lighting of fireworks or the floating of lanterns without permission in all provinces in a move to prevent explosions or fires during the New Year holiday period.

Interior Ministry permanent secretary Grisada Boonrach said officials would also be sent to check on fireworks factories and shops as well as New Year celebration venues to ensure they conformed to regulations.

Grisada said the Cabinet had resolved that this year’s celebration activities should be appropriate and orderly, involving multiple religious faiths and social service activities in memory of the late monarch King Bhumibol Adulyadej while offering blessings to His Majesty King Maha Vajiralongkorn. The ministry invited members of the public to join such activities to auspiciously welcome the new year, he said.

As people continued to pay respects to King Bhumibol Adulyadej’s Royal Urn at the Grand Palace, the Bangkok Metropolitan Administration set up stages and screens to prepare the southern area of the adjacent Sanam Luang for tonight’s Buddhist cross-year prayer ceremony.

The Sang Thien Haeng Siam (Candlelight of Siam) prayer ceremony will see thousands of candles lit to honour the late monarch and to mark the beginning of 2017.

Many black-clad members of the public formed a long queue yesterday morning and filled seats at eight tents in Sanam Luang to await their turn to pay respects.

Soldiers and volunteers provided security and students supplied the mourners with snacks and drinking water.

Delicious food was also provided to mourners at a northern area tent, on the instruction of HM the King. Nearby, the Yensira Phrophraboribal exhibition hall was still in the process of being decorated.

With the cross-year prayer being held at Central World Plaza as well as Sanam Luang, police expect more than 100,000 people to attend both sites.

Krisana said security would be provided by 3,500 officers and nearby roads would be closed to traffic.

In the Northeast, the Nakhon Ratchasima Cultural Office yesterday invited people to attend its cross-year prayer event at the Thao Suranaree Monument Plaza or at 571 temples in 32 districts.

They also invited people to attend a merit-making tour at six temples located within the old city walls tomorrow to welcome 2017 in a way that reflected the country’s culture and religious faith.