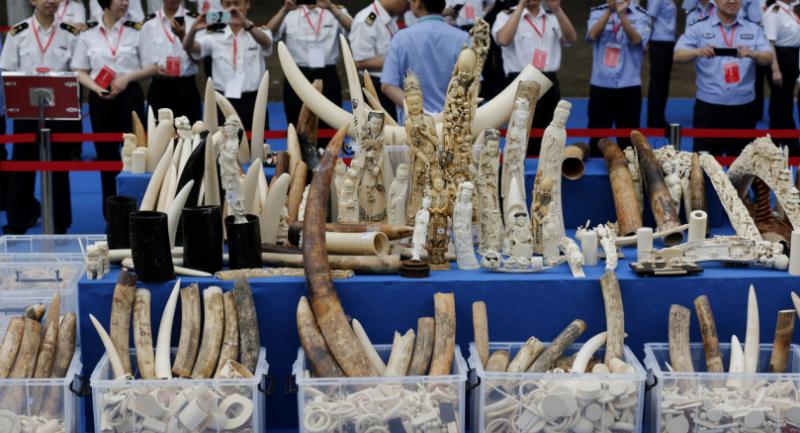 A file picture dated 29 May 2015 shows confiscated ivory items and carvings being displayed during an ivory destruction ceremony at Beijing's wildlife rescue and rehabilitation center, in Beijing, China.

China will ban all ivory trade and processing by the end of 2017, the government said, in a move hailed by conservationists as a "game changer" for African elephants.

African ivory is highly sought after in China, where it is seen as a status symbol, with prices for a kilo (2.2 pounds) reaching as high as $1,100.

"To better protect elephants and better tackle the illegal trade... China will gradually stop the processing and sale of ivory for commercial purposes" by the end of 2017, the State Council, China's cabinet, said in a statement late Friday.

"Before then, law enforcement agencies will continue to clamp down on illegality associated with elephant tusks," the official Xinhua news agency said, quoting a government official as saying.

A first batch of workshops and retailers would be forced to close by the end of March.

The move comes after Beijing said in March it would widen a ban on imports of all ivory and ivory products acquired before 1975, after pressure to restrict a trade that sees thousands of elephants slaughtered every year.

Xinhua said the complete ban would affect "34 processing enterprises and 143 designated trading venues, with dozens to be closed by the end of March 2017".

"This is great news that will shut down the world's largest market for elephant ivory," Aili Kang, executive director of the Wildlife Conservation Society in Asia, said in a statement.

"I am very proud of my country for showing this leadership that will help ensure that elephants have a fighting chance to beat extinction. This is a game changer for Africa's elephants."