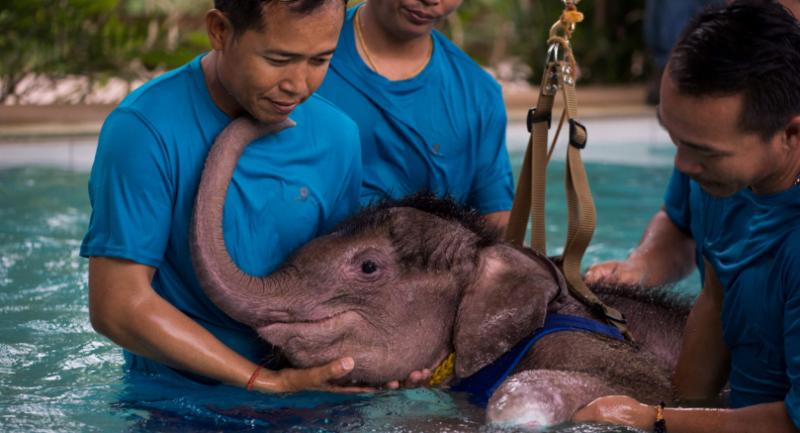 CHONBURI, Thailand - After losing part of her foot in a snare in Thailand, baby elephant 'Clear Sky' is now learning to walk again -- in water.

The six-month-old is the first elephant to receive hydrotherapy at an animal hospital in Chonburi province, a few hours from Bangkok.

The goal is to strengthen the withered muscles in her front leg, which was wounded three months ago in an animal trap laid by villagers to protect their crops.

The wrinkly pachyderm, who has has tufts of jet black hair sprouting on top of her head, limps around the pool before her swim.

"This is her second time getting water therapy so she is still a bit nervous and scared of the water," veterinarian Padet Siridumrong told AFP as a team of helpers clipped the animal into a harness and lowered her into the pool.

It was not all smooth sailing -- Clear Sky frantically slopped her trunk around and latched onto zookeepers for support.

But she appeared to relax by the end of the hour-long session.

"Usually baby elephants love water," explained Padet. "If she can do this regularly she will have fun."

The orphaned animal was in bad shape when staff at Nong Nooch Tropical Garden first took her in.

Separated from her mother in the wild, she was in dire need of milk and required surgery on her lacerated foot when she was found hobbling by villagers.

Now the wound has healed and the hope is that with more swimming, she will not need an artificial leg as she matures and puts on weight.

"We named her clear sky up ahead, because that is what she will need while she is with us," said Kampon Tansacha, the director of the zoo where she now lives.

Elephants are treasured as a national symbol in Thailand, the first country to open a hospital for the animals several decades ago.

But rapid development, habitat destruction and a thirst for ivory has seen the population of wild elephants plummet over the past century to an estimated 2,500.

The country is also home to some 4,000 domesticated elephants, which are used to power a lucrative animal tourism industry that activists say is rife with abuse.