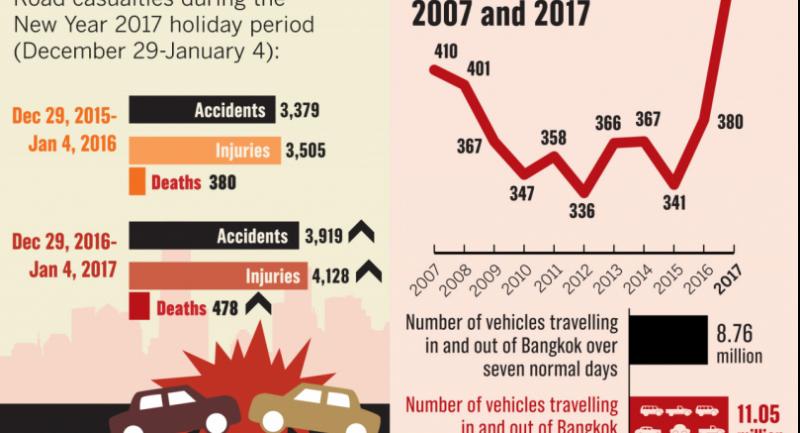 Drunk driving first cause of accidents, followed by speeding.

THE DEATH toll on Thailand’s roads over the so-called seven dangerous days of the New Year holiday increased by more than 25 per cent from last year to a total of 478 people killed.

Authorities said that this highest holiday death toll in a decade was partially due to the increase in vehicles and travellers.

The number of people injured in 3,919 traffic accidents during this year’s holidays, rose to 4,128 – an increase of more than 17 per cent over last year. According to available statistics, more than 11.05 million vehicles moved in and out of Bangkok between Dec 29, 2016 and January 4, 2017 – up from about 8.76 million over seven days in normal period.

The main cause of accidents this year was drunk driving at 36.59 per cent of all accidents followed by speeding at 31.31 per cent, while motorcycles were involved in most accidents at 81.82 per cent, Deputy Interior Minister Suthee Makboon announced at the Road Safety Directing Centre yesterday.

Chon Buri had the most road fatalities with 33 deaths followed by Udon Thani (24).

Udon Thani and Chiang Mai had the highest casualties at 164 injuries each followed by Nakhon Si Thammarat (125).

On Wednesday alone, the last day of accident-monitoring period, there were 340 accidents |that killed 52 people and injured 367.

Suthee said the Road Safety Directing Centre would have all provinces implement road safety measures including a campaign to boost motorist awareness of road rules and motorist discipline, as well as implement effective post-accident management.

He said the provinces would also have to amend laws in a bid to curb speeding, drunk driving and public transport crashes, while they have to get stricter with the issuance of driver licences.

All provinces were also told to analyse the factors contributing to accidents and road-safety campaign obstacles, he added.

Meanwhile, National Council for Peace and Order deputy spokesperson Colonel Sirichan Ngathong reported that from December 29 to January 4 the authorities had sent 66,783 motorists (including 42,240 motorcyclists) to face prosecution for driving under the influence of alcohol. A total of 4,354 vehicles (including 3,118 motorcycles) had been seized

In related news, it was reported that the Royal Thai Police’s “Fak Ban Wai Kub Tam Ruad” (“Leaving Houses in Police Care) project didn’t detect any criminal activities occurring at any of its 7,284 participating homes from December 25 to January 3.