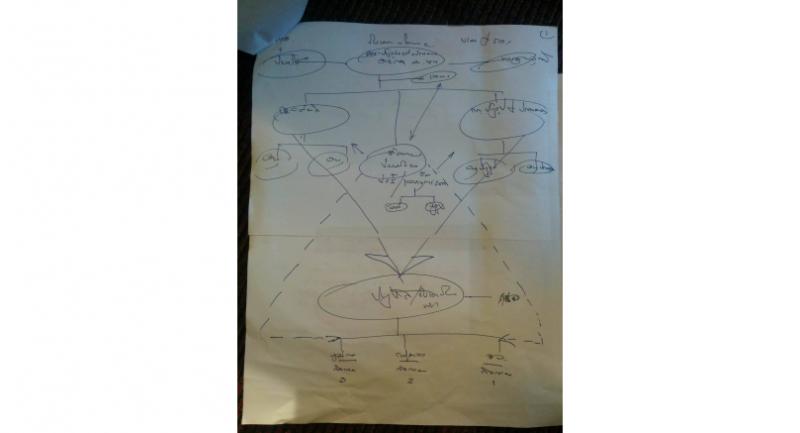 PM Prayut's chart of the new structure for reform and reconciliation

On Wednesday, the first day after the New Year break, Prime Minister Prayut Chan-o-cha unveiled a new structure to drive the country’s daunting reform and reconciliation work. Surprisingly, a source at Government House said Prayut had drawn up the plan himself over the holiday.

According to the hand-written chart, the structure comprises new bodies to oversee the big picture of reform and reconciliation for the first time, from the policy level to implementation, plus a follow-up body to ensure that the work is carried out as planned.

The new plan suggests Prayut is taking the matter more seriously than ever, realising that his governฌ ment with its absolute powers has limited time left before the general election. Yet the same hand-written chart also signalled the disappointing result of the work over the past three years of his administration.

Since then, several efforts have been made towards that twin goal. Shortly after the coup, the government set up the National Reform Council (NRC), to review all the country’s root problems, address them, and come up with solutions. When the NRC was dissolved in late 2015, the National Reform Steering Assembly took over to push the work forward.

The government also forged its own committee to expedite the policies shortly after the coup, which gave priority to reconciliation and worked alongside the NRC. It also set up other bodies to support the policies, including the latest committee to steer and reform the administration, set up in late 2015 with Prayut at its head while six sub-panels are chaired by his deputies.

And in his capacity as chief of the National Council for Peace and Order, Prayut also chairs the NCPO’s strategy steering committee – yet another body meant to drive reform and reconciliation. But it seems that the premier himself has now concluded that all these efforts at reform have fallen short of their goal. Reconciliation, meanwhile, has advanced little if at all.

The renewed effort by Prayut on this most daunting of tasks thus offers new hope of a more concerted action that will reap results. The prime minister’s hand-written chart offers a thorough plan on how to proceed. The biggest concern, however, is that it comes from him alone, while the problems it aim to tackle are shared by every one. Reform and reconciliation is in fact a delicate process that needs time and dialogue through which genuine understanding can be forged.

We can only hope that the premier realises this fact and takes it into account with his latest effort. Otherwise, we risk embarking on another top-down hardline approach that would only deepen the division and wounds in people’s hearts while doing nothing to heal them.