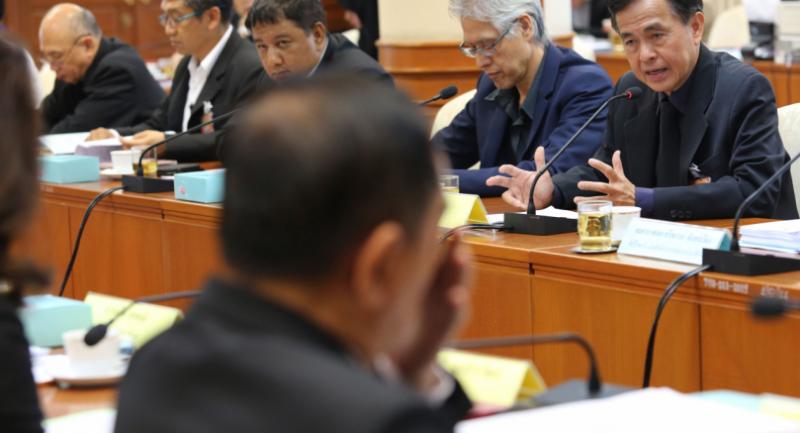 They fear such a composition would allow interference in the media and infringement of press freedom, media representatives told government-appointed reformers at a special session.

The committee would also oversee complaints about media violations of people’s rights and otherwise, the Article stipulates. Its 13 members would include four permanent secretaries from the Prime Minister’s Office, Digital Economy and Society Ministry, Culture Ministry and Finance Ministry.

This has raised concerns among six major media groups that allowing such high-ranking governmental officials to cast their eyes over deliberations could lead to a restrictive atmosphere.

The draft is due to be presented to the NRSA for endorsement next month. If approved, it would be proposed to the Cabinet and the National Legislative Assembly (NLA) respectively following legislative procedures.

Thepchai Yong, chairman of the Thai Broadcast Journalists Association (TBJA), said there were serious concerns about political interference in the media’s work. The state officials on the committee could be seen as representing political interests, with the power to block the media in the performance of its work, he said.

In addition, he said, officials are supposed to be subject to media scrutiny. “It is not a case that we, the media, cannot be touched or that we only think of ourselves, but we are concerned about the impact on freedom and the people’s right to information. If the media is blocked, so is our society,” said Thepchai. “We may be wrong sometimes but by issuing a new regulation to blanket everything runs against the principle of media reform.”

Developing self-regulation Thepchai said that the media’s current self-regulation, though not completely effective, has been constantly developed. “It should be noted that we mainstream media are distinctive from [non-established online] social media outlets,” he said. “While people may think that media are all the same, us and them should be treated differently.”

Yesterday’s session was a follow-up to a letter the six groups co-proposed to the NRSA last month on their concerns.

NPCT president Chavarong Limpattamapanee said that an earlier version of the draft, deliberated by the Council of State in 2012, should instead be revived as it encouraged media self-regulation and ethics promotion via a committee comprising experts in various fields. “I don’t think that print media should be regulated like television and radio,” Chavarong said, countering the NRSA committee’s point. “The latter two are national communication resources while the print media are private industries.”

The NRSA committee, meanwhile, responded that the bill draft had “a long way to develop” as it would be screened by the main NRSA, the Cabinet and the NLA. However, they said media regulation laws should be in place to keep up with fast-changing online platforms.

NRSA committee head ACM Kanit Suwannet said the media’s proposals would be considered and attached to the committee’s report, while remaining non-committal on whether the media proposals would bring about any change in the draft.

Another committee member, Permpong Chavalit, said the bill was needed to help regulate media work amid the rapid development of |technology.