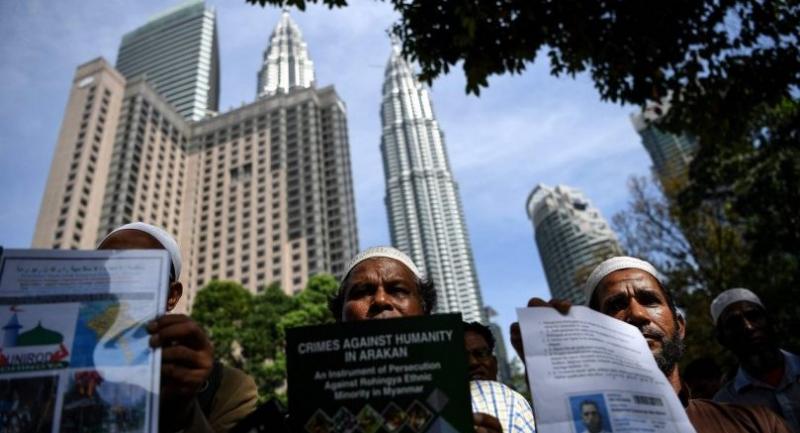 Rohingya refugees living in Malaysia gather outside the venue of the Extraordinary Session of the Organisation of Islamic Cooperation (OIC) on the Rohingya situation in Myanmar, in Kuala Lumpur on Thursday. / AFP PHOTO / MANAN VATSYAYANA

Since October Myanmar's army has carried out "clearance operations" in the north of western Rakhine state to root out insurgents accused of deadly raids on police border posts.

At least 66,000 Rohingya have subsequently fled to neighbouring Bangladesh, alleging rape, murder and torture at the hands of security forces. But Myanmar denies the allegations.

"Far too many people have lost their lives in Myanmar," said premier Najib Razak, speaking in Kuala Lumpur at the opening of a special meeting of foreign ministers of the Organisation of Islamic Cooperation (OIC).

"Many have suffered appalling deaths, and those that have lived through the atrocities have witnessed or endured unspeakable cruelty," he added.

"For a start, the killing must stop. The violation of women and girls must stop," he said, adding that "the persecution of your fellow men and women, simply on the grounds that they are Muslim, must stop."

The plight of the Rohingya, a stateless group denied citizenship in Myanmar and reviled as illegal immigrants by the majority Buddhist population, has become a lightning rod for anger across the Muslim world.

Najib, who has called the crisis a "genocide" and whose prominent defence of the Rohingya comes as he battles a massive graft scandal at home, warned the issue could fan the flames of international jihad.

"OIC member states are well aware that terrorist organisations such as Daesh (Islamic State) could seek to take advantage of this situation," he said.

"This should concern the international community as a whole, as the threat of a new home for terrorist groups has the potential to cause death and destruction well beyond this region."

Najib added that Myanmar's treatment of the Rohingya -- tens of thousands of whom have languished in displacement camps since communal riots in 2012 -- was a "stain" on the 10-member Southeast Asian regional bloc Asean.

The Nobel Peace Prize winner is accused of standing by while the Rohingya have been persecuted.

She has appointed a commission to investigate the latest violence and has urged the international community to give Myanmar time to heal a bitter and complicated issue.

Myanmar refuses to recognises Rohingya as an official ethnic group.

Instead it describes them pejoratively as Bengalis -- or illegal immigrants from neighbouring Bangladesh -- even though many have lived in Myanmar for generations.

The secretary-general of the 56-member OIC, Yousef Al-Othaimeen, urged Myanmar security forces to use restraint with civilian populations or risk fuelling a violent reaction from oppressed groups.

Analysts say Najib's embrace of the Rohingya in part aims to burnish his international image after the damaging 1MDB graft scandal.

The premier has been buffeted by allegations that he took part in the looting of billions of dollars of public cash through state fund 1MDB.

Both he and the fund vehemently deny the allegations.