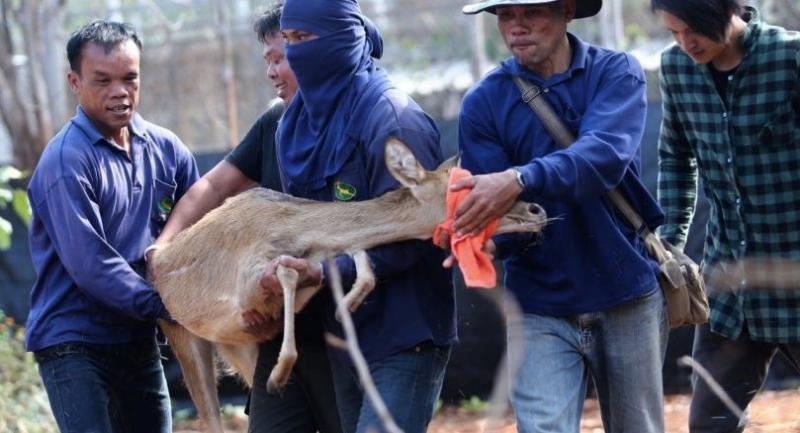 National Parks Department officials and workers yesterday catch the protected and endangered animals left at the Tiger Temple or Wat Pa Luang Ta Maha Bua in Kanchanaburi province to move them to other wildlife breeding stations in nearby provinces.

The animals were left over from the last animal seizure at the controversial temple mid last year, and they will be moved to other wildlife breeding operations in nearby provinces for better care.

In the previous seizure, the animals were deemed to be confiscated assets. That operation was led by former deputy director general Adisorn Nuchdamrong.

He led a group of park officials and veterinarians to move 147 tigers and some others animals from the Tiger Temple, or Wat Pa Luang Ta Maha Bua.

The operation unearthed a lot of talismans and wild animal carcasses, including tiger cubs, in the compound. The temple was suspected of being linked to wildlife trafficking.

The tigers were moved to the Khao Son and the Khao Prathapchang wildlife breeding stations in nearby Ratchaburi province. But a number of other protected and endangered animals, including barking deers and thamin deers, remained in the wild at the 400 rai (64 hectare) temple compound.

The wildlife sanctuary chief under the Protected Areas Regional Office 3 office, Sikhapong Krajaejan, led the operation on Thursday. He said up to 120 animals were fed in the compound but they were scattered as they roamed free.

Only six were caught on Thursday.

It is estimated that the operation will take around a month to complete.

“We have to wait for them [the animals] somewhere on a rugged terrain and do so with patience, before putting them in cages. And we can do this only during the morning and the evening because if we chase them during the day, they would be hurt,” said the office’s director Yanyong Lekhawijit.