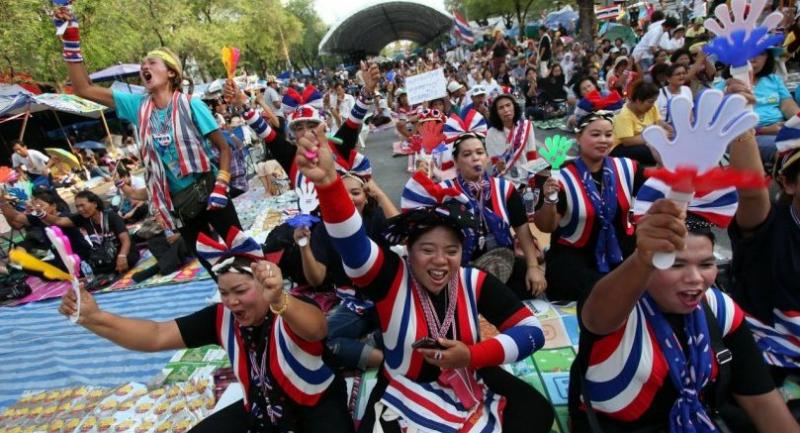 The criteria for differentiating and categorising politically motivated criminal offences and related legal procedures will for the first time be addressed by the lawmaking body of the National Legislative Assembly_as part of a bid to forge reconciliation in relation to those involved in demonstrations and unrest since 2005.

In addition, the criteria for the rehabilitation of damaged parties will also be addressed as the body is preparing the new bill.

As observed by The Nation, the draft bill notes that politically driven offences from 2005 to the May 22, 2014 coup plunged the country into social unrest. The turmoil, it further notes, resulted in casualties and criminal offences that would be difficult to deal with under normal legal procedures, especially when dealing with politically motivated offences.

As such it is necessary to have a new law to facilitate specific and appropriate 'delivery of justice' for all concerned – from the offenders to the victims – without distorting or interfering with the normal course of justice. But the bill excludes amnesty for violations of the Criminal Code’s Article 84, corruption, lese majeste and human rights.

“It is expected that this law will be the beginning of reconciliation and the move towards peace and unity,” the bill reads.

The bill’s nine pages are divided into three main chapters plus a provisional chapter.

The first chapter deals with the newly established committee, which will supervise the criteria and related legal measures. As stipulated in the draft, the panel will comprise 11 members drawn from independent organisations, judges, prosecutors as well as legal and human rights experts.

The committee’s jurisdiction and authority is listed in Chapter 2. The committee’s duties include gathering relevant facts and cases from concerned parties in order to establish the criteria to differentiate and categorise offences. Severity of the offences, proportion of the action taken plus the impact on individuals and society must be taken into account when setting such criteria, the bill’s Article 18, Paragraph 2 stipulates.

The committee is also tasked with coming up with legal proposals to facilitate the delivery of justice. Their recommendations on the categorisation of offences and related legal procedures will be forwarded to prosecutors, who will then decide whether the cases should be pursued.

Article 20 also says that the court can use the information and views of committee members when deliberating on the cases. Several legal options have been provided for the court, ranging from penalty suspension or reduction to total dismissal of the penalty.

As well as the criteria for criminal offences and related legal action, the committee is also tasked with setting the criteria for the rehabilitation of damaged persons. Under the chapter’s Article 21, the panel is tasked with surveying damages, coming up with reports and recommendations and developing criteria upon which the state will base its actions.

The last chapter specifies penalties that will be imposed on those who fail to cooperate with the fact-finding procedure. Committee members who expose facts without the committee’s endorsement will also face penalties.

The provisional chapter sets specific conditions to pave the way for the committee’s work.

The committee has 60 days to come up with the criteria, while those seeking justice under this bill will have six months to submit their cases to the committee. Pending cases, meanwhile, will proceed as per normal.

As stipulated in the draft, the bill will be in effect for three years after it is promulgated in the Royal Gazette.

The idea behind the bill

A source close to the issue told The Nation that the bill is being developed based on the previous work done by the National Reform Council’s Reconciliation Study committee chaired by peace advocate Anek Laothammatat.

Under the study, the delivery of justice was proposed as part of six key moves towards reconciliation.

The source said the bill is based upon the ideas of “transitional justice” and “reconciliatory justice”, under which the justice system will prioritise victims of violent incidents and come up with appropriate judiciary action and rehabilitation measures in order to reconcile concerned parties.

The other five proposals aim to forge a joint understanding of the root cause of the incidents, the fact-finding process, rehabilitation of the victims and society, building a pleasant atmosphere for coexistence and measures to prevent violent incidents.

The study suggests that these procedures be completed on a step-by-step basis.

The committee’s study was put on hold after the NRC was dissolved following the voting down of the first charter draft in 2015, the source said.

Some proposals in the study, however, were considered by the government, and its working group was called to work on them further, including the justice delivery proposal, the source said.

A working group connected to the NLA, which is led by a noted legal expert, helped the committee develop the draft bill.

The draft seen by The Nation is the latest version, which is now with the NLA’s political committee.

“As you see, part of the reconciliation process is providing justice to all based on the degree of action and offences as well as a means to build mutual compassion. So, reconciliation via this process is definitely not like providing amnesty,” the source added.

Somchai Sawaengkarn, secretary to the NLA’s whip, told The Nation that so far the NLA has not received an official proposal to kick-start the law-deliberation process. At least 25 signatures from NLA members are required to start the process.

Somchai said he agrees in principle that the country needs reconciliation, otherwise it cannot move forward with other critical work, such as reform.

Hence, reconciliation has to proceed once a certain degree of stability has been achieved. However, Somchai does not see this law-making process as an ultimate solution, as he believes mutual agreement is also important. Once mutual understanding is achieved, then legally binding documents can be created, he said.

Finding common ground is necessary as it will always be difficult to find the actual truth, Somchai said. South Africa, for instance, took years to learn the truth about its divided society before it managed to reconcile and move forward, he said.

Similarly, Thai society, he said, should try to find the truth so it can establish facts and come up with appropriate and acceptable measures to deal with offenders and victims.

Somchai pointed out that a lot of people facing legal action were ordinary folk who may have been provoked to join the protests. These people, he said, should not have been marked as terrorists if they did not commit serious offences and should undergo different legal procedures that are more flexible and proportional to their acts.

“If possible, I wish to review all cases so we can make them right. This is what we call ‘transitional justice’, under which we place the truth on the table and deal with what went wrong based upon it, including forgiveness,” said Somchai. “But to be able to forgive, people need to learn about the truth first. So, reconciliation truly needs agreement and acceptance as a precondition, before ‘a transitional justice’ can be arrived at.”

So far, efforts to find common ground have been pursued by some few committees. One is a newly established body, the reconciliation preparation panel under the government’s administration committee for reform, reconciliation and national strategy. It is chaired by Deputy Prime Minister Prawit Wongsuwan.

Another panel is the Prawit committee’s sub-panel chaired by Defence permanent-secretary General Chaichan Changmongkol. The latest one set up to pursue the task is the National Reform Steering Assembly’s sub-panel of the political committee and is chaired by Sangsit Piriyarangsan.