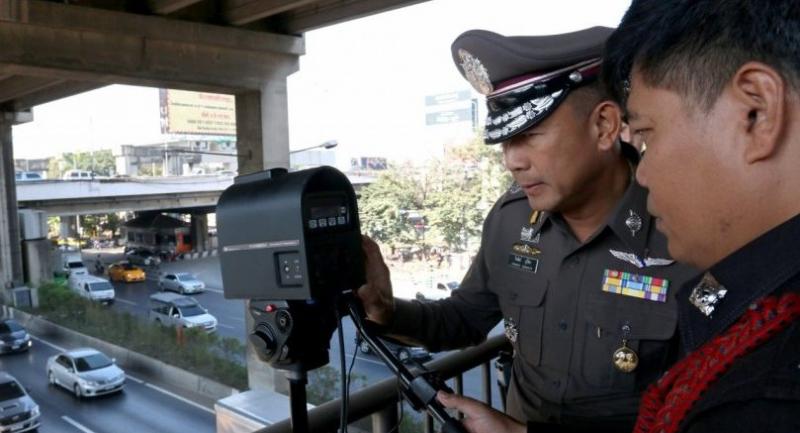 Pol Maj-General Jirapat Phumjit, the city deputy chief who oversees traffic regulations, inspects the use of

TRAFFIC POLICE have introduced portable cameras at random locations on roads across the city to catch motorists driving in the wrong lane and speeding.

Currently, most traffic cameras are positioned at intersections to catch motorists who run red lights. The new portable cameras are intended to broaden the search for offenders, the Metropolitan Police Bureau (MPB) said yesterday.

Pol Maj-General Jirapat Phumjit, the MPB deputy chief who oversees traffic regulations, said 14 “lane check” speed cameras and still-photo cameras at 88 precincts were currently in use to back police operations to prevent traffic violations. Photos of speeding vehicles and their licence plate numbers will be used as evidence to prosecute offenders, he said.

An “e-ticket” will be mailed to the driver’s address advising them to pay the fine within seven days. Failure to pay the fine upon receiving a second notice in 30 days would result in the driver being blacklisted from renewal of vehicle registration and tax or any transactions related to the vehicle, Jirapat said.

Drivers can pay traffic fines at police stations or at the Krungthai bank offices and its ATMs, he added.

Jirapat inspected the Vibhavadi Road area yesterday to ensure the new measures were being implemented smoothly. He said the area records about 300 traffic offences a day, most of which involve speeding and motorcycles riding in the wrong lane.

Most traffic offences in Bangkok involve driving against traffic, motorcycles riding on the footpath and vehicles overtaking at restricted road sections, he said.

In a related development, Pol Maj-General Panurat Lakboon yesterday led a meeting of an MPB working team to install CCTV cameras across the city to aid crime prevention and suppression.

He said police could link and check feeds of 13,000 of the cameras immediately, while they were still discussing access to the BMA’s 50,000 cameras.

As the BMA was reportedly receptive to allowing access and was in the process of asking for the approval of the PM’s Office, police expected that the whole security camera system would be fully connected by March, Panurat said.

Panurat said Bangkok had 393 at-risk locations for crime that needed additional cameras such as Nawamin and Ram-Indra roads, where a high number of thefts had been reported. Of these locations, 30 spots were considered national-security risk areas, which would require high definition or infrared cameras, he added.