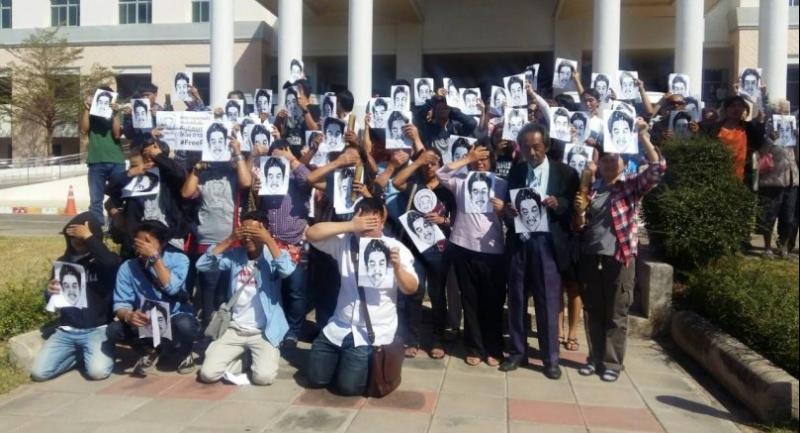 Pro-democracy activists and the parents of anti-junta activist Jatupat

The court insisted on upholding its order that Jatupat remain behind bars for another 12A days ahead of trial.

With his bail application being revoked in December, Jatupat will have been in detention for over 40 days even though he remains innocent until proved guilty.

Jatupat has been facing lese majeste and computer crime violation charges since early December for sharing a BBC article that was deemed insulting to the monarchy. Though the young activist was released on bail, he was put behind bars again after publishing another Facebook post that was deemed disrespectful to police officers.

Some 80 family members and fellow anti-junta activists showed up at Khon Kaen Court yesterday to hear the court’s decision on the police request to detain Jatupat for another 12 days. However, they were kept out of court as it chose to consider the request behind closed doors.

Although the order for a closed trial was no different from the previous ones, things got a bit dramatic yesterday when the activist’s mother, Prim Boonbatraraksa, began banging her head against the wall of the court room and wailing about injustice.

She called for an open and inclusive hearing, saying that her son has been in detention for over 40 days even though he has yet to be proved guilty. She said his detention was unfair from the very beginning.

Prim was eventually taken out of the area by Jatupat’s supporters and administered first aid.

Meanwhile, the activist insisted on standing trial alone, saying he did not want his lawyers to witness an “unjust” hearing. Regardless, the court held a closed-door hearing and ordered that he be detained for another 12 days as requested by police. Later, Jatupat’s lawyer applied for a Bt400,000 bail but was rejected.

Jatupat, a 25-year-old law student, has already missed his final exams for graduation since he has been behind bars. A rights agency has been urging Khon Kaen University to let the activist sit for his exams in detention, though it is still unclear whether this would be allowed and if he can graduate this year.

Jatupat’s father Viboon Boonpatraraksa said the detention was unnecessary as his son showed no tendency to tamper with evidence. He accepted the court’s decision to detain his son for another 12 days, but he expressed concern that this practice would affect the norms of justice.

He went on to say that they only wanted an open hearing, but that was turned down. He said this was problematic because there was no way they could know what the police officers had told the court.

If this was an open trial, it would have been for everyone, he said. This way both sides could see each other’s arguments and weigh the claims for themselves, Viboon said.

Jatupat’s supporters, including prominent figures such as Rangsiman Rome, Pakorn Areekul and Siriwich Serithiwat, held a symbolic activity calling for the activist’s release by presenting his portrait with Thai dessert khao lam – sweet sticky rice baked in bamboo, which translates into Thai as pai.