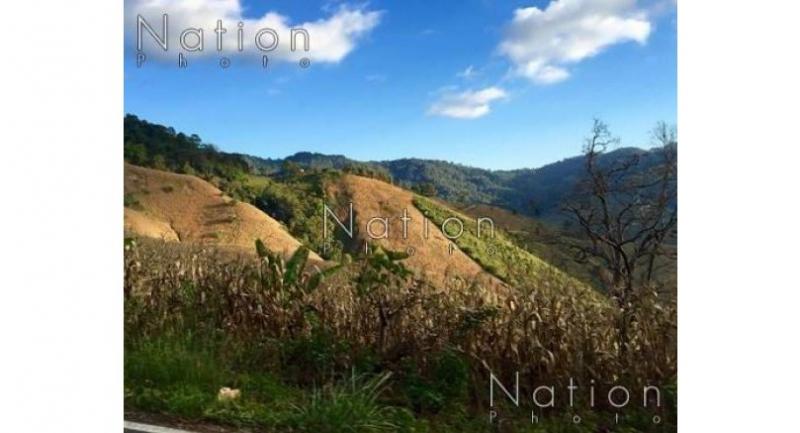 This maize plantation covers the entire slope of a mountain in Nan, which is also one of the water sources of the Chao Phraya River. Pratch Rujivanarom

BAN Nam Chang village in Nan province has become a pioneer in tackling the seasonal haze problem in the North by changing its farming practices.

With summer set to begin soon, farmers will soon be setting their fields on fire to clear land for the new crop. This causes severe smog problems across the North every year and the Mae Fah Luang Foundation has been working with communities in Nan to solve this problem by helping farmers shift to more sustainable practices.

Situated in a valley in Chaloem Phra Kiat, a mountainous district in Nan, Ban Nam Chang has a vast farming area on steep slopes. However, unlike other communities in the area that focus on growing maize, this village is green with different kinds of vegetables and banana orchards, while the mountaintops remain lush with forests.

Karn Chalernchitratanakul, the village head, said his village decided to stop burning farmland during the dry season by shifting from maize to growing mixed produce and agro-forestry.

“In the past, this village also focused on growing maize and it was a tradition to burn the maize stubble after the harvest in winter. This practice caused heavy air pollution,” Karn said.

“However, seven years ago Mae Fah Luang Foundation stepped in and helped the local people shift from growing just maize to growing different vegetables and replanting the forest. This effort has changed our village, as we don’t have to burn fields anymore.”

“The easiest and cheapest way to clear land for a new crop is to burn the field, so we cannot avoid the haze problem. Even though we have a three-month-long burning ban, farmers just burn their fields after the ban period,” Narong said.

“Therefore, the only way we can tackle this problem is by changing the farming practices of local people, so they will not burn their fields and cause pollution. However, we also have to ensure that people will get more benefits from the new style of farming.”

He said the foundation encouraged farmers in 20 targeted villages to replace maize with upland rice and other vegetables and fruit.

It also promoted agroforestry so farmers can harvest products from the forest such as coffee, cinnamon or cashew nut. These new crops, he said, were also providing a better income. Now farmers earn around Bt6,000 per month compared to the Bt3,000 they earned from growing maize.

Narong said in order to achieve further success in preventing haze, the authorities should reconsider their compensation plan in the event of wildfires. Currently the government pays for damages when a fire has taken place.

“The government should reverse this plan, by granting funds for communities that prevent fires and cut this funding if they fail in their mission. That would encourage people to prevent fires and solve the haze problem,” he said.

Meanwhile, Nan governor Paisan Wimonrut said the province had taken steps to avoid the haze problem by ordering relevant agencies to educate farmers about managing their waste without having to burn their fields.

“This year the province has banned burning from February 15 to April 15 and we are cooperating with Laos authorities to control their burning practices as well. So, we are confident that this year, the haze problem will not be as severe as previous years,” Paisan said.