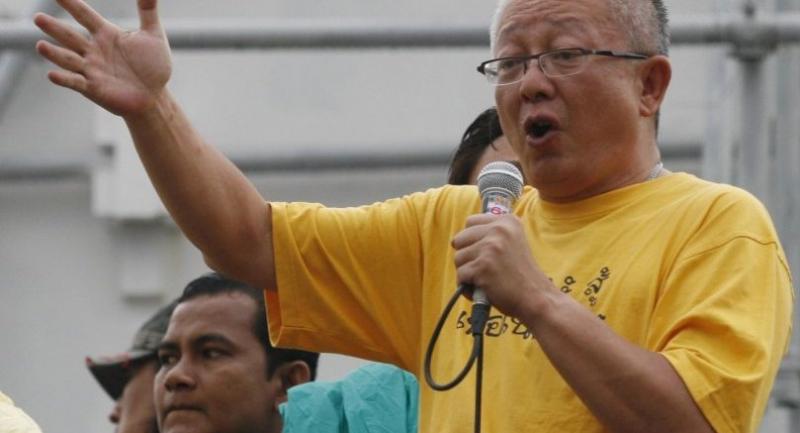 THE SUPREME Court yesterday ruled in favour of Sondhi Limthongkul, a former activist convicted of lese majeste, saying he had no intention of repeating another activist’s insults that were made in a political speech in 2008.

The ruling reversed the Appeals Court’s decision that saw Sondhi jailed for two years on the same charge.

The Criminal Court found Sondhi not guilty of repeating statements by Daranee Charnchoengsilpakul, known as Da Torpedo, who was charged with insulting the monarchy when he gave a speech during a protest held by People’s Alliance for Democracy at Sanam Luang.

The charge was dismissed as the court believed that Sonthi repeated the statements only to call for police to prosecute Daranee for what she said.

The Supreme Court ruled that the defendant had merely referred to Daranee’s speech to point out that her words insulted the monarchy. Sonthi’s intention was to urge police to take action against Daranee, believing they had ignored their duty as she supported the then government.

There were no other statements that could imply the defendant intended to violate lese majeste laws.

Sondhi, who is serving a 20-year jail term for falsifying documents used to obtain a loan from Krung Thai Bank, was taken to the court to hear the verdict.

The activist, however, denied all allegations.

Prosecutors called on the court to deny any bail request from Jatupat, who has been detained for two months. They said the “crime” concerned national security involving an institution highly revered by the people and the possibility of severe punishment could lead him to abscond.

Jatupat’s legal team, however, did not apply for bail. A source said that they had to prepare evidence to present to the court to ensure he would not jump bail. A bail application would take place in the next week or so, he said.

The student has been detained since late December after his earlier bail was revoked. He was charged in early December and released on Bt400,000 bail which was rescinded later when he complained on Facebook that the bail was expensive.

Some 60 people were present at the court |yesterday to provide moral support to the young activist, although only the defendant, his parents, and lawyers were allowed into the hearing.