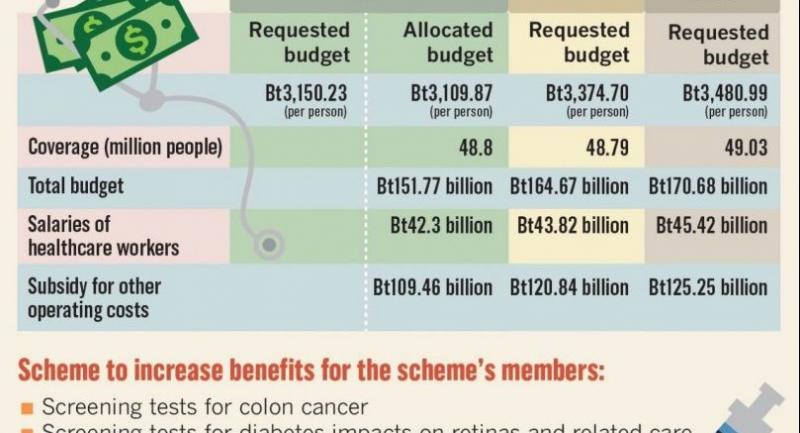 The National Health Security Office (NHSO), which operates the scheme, has submitted a Bt164-billion budget request for the next fiscal year but ended up getting just Bt151 billion.

“We have had concerns about such budget constraints,” Dr Jadej Thammatach-aree, deputy secretary-general of the NHSO, said yesterday. His office may have to request further funding later, he said.

The scheme provides free coverage for most medical services to about 48 million citizens.

“It’s natural that when people get old, they develop more health problems,” he said.

“This means when Thailand becomes a full-fledged ageing society, its healthcare systems will have to deal more with diabetes, degenerative knees, blood-pressure issues and heart diseases.” The National Statistical Office estimates that Thailand will be home to about 17 million seniors by 2021. That will be enough to turn the country into a confirmed ageing society.

Jate said health authorities would not be able to ignore for long the greying of society when handling budgets.

“In fact, it’s now high time that health agencies started talking about how much the healthcare cost will be when Thailand becomes a full-fledged ageing society,” he said.

Jadej said there were other drivers of the scheme’s burgeoning costs, such as technical advances and pay raises.

“State-of-the-art technologies are practical but often expensive,” he said.

“It should be noted that the salaries of these medical workers come from the budget the government has allocated to state hospitals.

“Salaries will increase by about 2 per cent next year.”

Jate thinks now is the right time to consider seeking co-payments from patients to help share the cost of services.

This proposal is not new. Several doctors have been pushing for it for years, warning that the country will suffer under the weight of a free health system that has taken a bigger bite out of the state budget in recent years.

However, every time authorities start moving towards co-payments to save the scheme from collapse, they are met with complaints that the government intends to scrap the popular policy.

This security net, which has been around for more than a decade, has won the hearts of Thais who feel they no longer have to worry about the risk of medical bankruptcy.

People now feel it is their entitlement to receive medical attention when the need arises. This differs from the old days when state hospitals provided free medical care to the needy, but had to classify such patients as “destitute” first.

The universal healthcare scheme has won international praise for its benefits to the majority of Thais.

Every year, the NHSO has also done its best to try to expand coverage.

For example, starting next fiscal year or October 1, the scheme will provide free screening for colon cancer and the HPV vaccine to reduce the risks of cervical cancer.

The Budget Bureau has agreed to approve funds for these two new benefits but asked the NHSO to cut many other benefits it had hoped to deliver. For example, the Budget Bureau has denied an extra budget for screening tests for diabetes impacts on retinas and related care, and active screening for tuberculosis (TB).