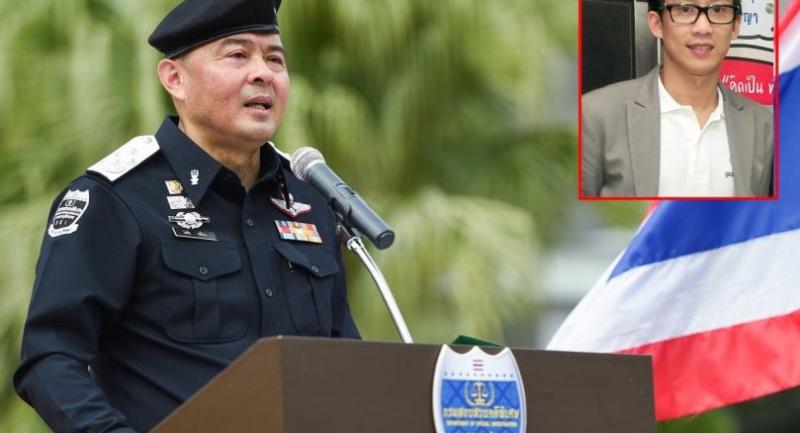 DEPARTMENT OF Special Investigation chief Pol Colonel Paisit Wongmuang yesterday said he was personally taking control of the investigation into the Krungthai Bank-money laundering case because of the lack of progress.

After a meeting yesterday with DSI investigators who were in charge of the case, Paisit said he was stepping in to expedite the inquiry as investigators had only one year before the statute of limitations expired.

Paisit said investigators were reviewing how Panthongtae Shinawatra, the son of former prime minister Thaksin Shinawatra, was involved in the case.

Paisit said he had also appointed Pol Lt-Colonel Pakorn Suchiwakul, director of the financial and banking division of the DSI, to join the investigation team.

“I hereby affirm that speeding up the probe has nothing to do with politics,” Paisit said.

“I am simply carrying out what has to be done in accordance with normal procedures because the case has been under the responsibility of the DSI for a long time.”

The controversial case is connected to earlier malfeasance convictions of former senior executives at Krungthai Bank.

In August 2015, the Supreme Court’s Criminal Division for Political Office Holders sentenced Suchai Chaovisit, former chairman of the bank, and Viroj Nualkhair, the former president, to 18-year jail terms for approving Bt8-billion loans to subsidiaries of Krisada Mahanakorn Group in 2003 for refinancing and land acquisition.

The court found that the funds were used for other purposes, causing financial damage to the state-owned bank. Krisada Mahanakorn was classified at the time as a non-performing debtor.

According to DSI sources, the initial DSI investigation team probed links to Panthongtae, Kanchana and Manop following reports that money from Krungthai Bank had been transferred to their accounts but the inquiry had not found sufficient evidence to proceed with prosecutions.

The initial team was headed by Pol Lt-Colonel Somboon Sarasit, who was later transferred to the PM’s Office.

Instead, the AMLO chief sent a two-page letter to Paisit, saying that the office had completed its part of investigation by pressing charges against the suspects.

However, AMLO representative Witthaya Nititham, who attended yesterday’s meeting, determined after reviewing case documents that the AMLO had not pressed charges against anyone in the case. As a result, Witthaya said the agency would press charges only if the DSI found strong criminal evidence.

According to the DSI source, Paisit had assigned Pakorn to seek documents from the Stock of Exchange of Thailand to determine whether Panthongtae, Kanchana and Manop had bought stocks from the Krisada Mahanakorn Group, as the three had claimed.

Although the DSI team had failed to find evidence to substantiate charges of money laundering against the three, it did find that Ratsada Krisdathanon, a son of Krisda executive Vichai Krisadathanon, had transferred Bt26 million in funds to Panthongtae.

During the investigation, Panthongtae claimed the money had been transferred to his account to buy shares of Ch Karnchang Public Company, but Ratsada had cancelled the cheque after being asked that someone else make the purchase on his behalf.