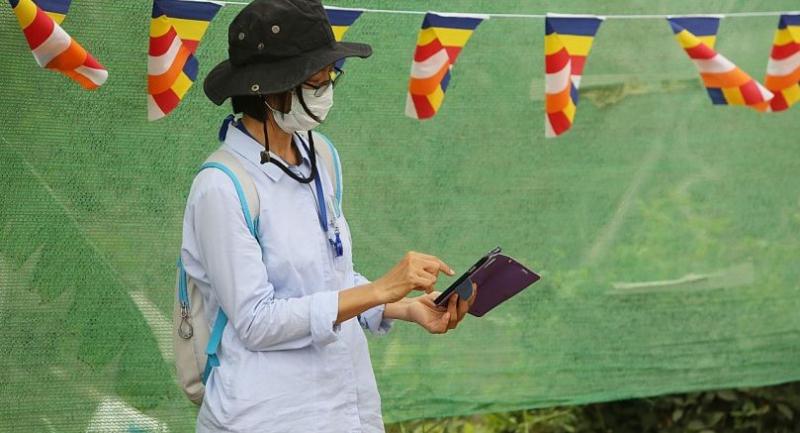 Tension high as 10-day siege continues with communication signals in and around compound cut off.

THE controversial Dhammakaya Temple has hit back strongly at the government after authorities yesterday blocked mobile-phone signals and the Internet in the monastery’s vast compound.

With a court-issued warrant to search the 2,100-rai (336 hectares) complex in Pathum Thani set to expire at midnight, the government has been on the defensive after failing to arrest the temple’s former abbot Phra Dhammachayo.

The temple’s monks, staff and followers have reacted against the ongoing siege by authorities with protests, online attacks and a petition to the United Nations.

Phra Noppadon Siriwangso, a key monk at Dhammakaya, urged followers yesterday to “urgently gather” in great numbers at the temple.

“Signals have been cut. Don’t wait,” the monk said on his Facebook page.

The Department of Special Investigation yesterday asked the National Broadcasting and Telecommunications Commission (NBTC) tell all network operators to block mobile-phone signals in and around the temple compound. It was unclear how long the signal block would last.

DSI director-general Paisit Wongmuang said the move was an attempt to control the temple’s information dissemination.

In response, temple communication chief Phra Sanitwong Chareonrattawong told a press conference the move was an “over-reaction” from the authorities. He said it would affect not only monks and disciples but also residents in the surrounding areas.

He said all people should be allowed equal rights and liberties.

He said the action was an out-of-line measure that reflected authorities’ fear of the truth and its desire to muzzle the temple.

“The government should be open-minded to let people hear information from both sides and made a decision for themselves,” he said.

He called for the reestablishment of communications and preached non-violence.

“I will light candles in daylight [as a gesture] to prevent the society’s blindness from information blocking,” he added.

The monk said the temple did not consider itself to be at war with anyone.

He urged the media “not to create a false image” that the temple was a threat to national security and Buddhism.

Paisit said the move to prevent temple communications was necessary as disciples had used social media to spread false information, creating misunderstanding and negative sentiment among the public, which affected the officers’ duties there.

Authorities did not have a timeframe on how long the communication blackout would last, he said.

He said the action was implemented following a junta order, issued under the interim charter’s all-powerful Article 44, which declared temple ground a controlled zone to make way for authorities searching for Dhammachayo. The monk is wanted for alleged money laundering and accepting stolen assets.

Paisit said the communications blackout stemmed from the DSI’s meeting with related agencies, including the NBTC, yesterday morning at the Region 1 Border Patrol Police Bureau in Pathum Thani’s Klong Luang district. The meeting was called to re-assess and adjust the search operation, he added.

The adjustment followed Thursday’s tussle between some 50 troops and some 500 disciples and monks at Gate 1 near the Boon Raksa building and a protest by temple supporters at the Klong Luang Central Market.

Amnesty International’s Thailand office yesterday rejected a Dhammakaya claim that the international human rights group “supported and stood by the temple”. The group said in its statement that it was just closely monitoring the situation.

Phra Sanitwong told an earlier press conference at Gate 5 yesterday that officers should allow the procession, conducted as per the Buddhist principle, to pass through because the temple’s food supply was low despite the authority’s initially allowing food supplies to be brought in.

He urged authorities not to cut water and electricity at the temple, saying the temple had allowed officers to search the compound three times in search of its former abbot. They did not find illegal items but refused to leave, he added.

He also dismissed as untrue a claim that the Dhammakaya Foundation had bought land that encroached on a mangrove forest in Krabi province.

Meanwhile, former deputy prime minister Kittiratt Na-Ranong, who has not been seen in public for a while, was observed near Dhammakaya Temple yesterday – giving alms to monks.

Kittiratt, who served under Yingluck Shinawatra government, reportedly said he came to give food to monks after learning the temple had run out of food.