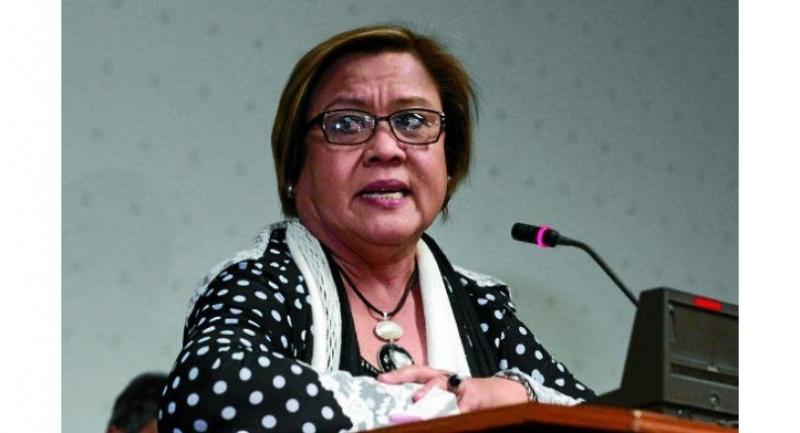 Allies of Senator Leila de Lima described her persecution as an attempt of President Rodrigo Duterte’s government to silence his critics.

Vice President Leni Robredo and other allies of Sen. Leila de Lima condemned her arrest on Friday on drug charges, saying it was meant to silence all opposition to President Duterte and showed an emerging dictatorship.

They said the legal process had been railroaded to ensure she spent time in jail to create a “chilling effect” among those who expressed their disagreement with policies of the Duterte administration, particularly his bloody war on drugs.

Robredo, who was forced to step down from the Cabinet last year, suggested that the Duterte government is beginning to turn toward the same dictatorial rule that the country had endured under Ferdinand Marcos with the arrest of De Lima, one of the President’s fiercest critics.

In a speech at the University of the Philippines School of Economics, her alma mater, Robredo said some of the nation’s leaders would like Filipinos to forget the atrocities under Marcos’ martial law and glorify his dictatorship “to revise the history so that he is remembered a hero, and not the thief and murderer that he was.”

“Some leaders want to raise the fist of authoritarianism, to sow fear and discord among ourselves, to divide us with lies, violence, and bloodshed. It has begun,” she said.

Addressing President Rodrigo Duterte directly, Robredo said instead of silencing dissenters the President should deal with issues that matter to ordinary Filipinos.

“Mr. President, we call you to task. In behalf of the Filipino people, whose daily struggles are escalating, we ask you to focus on the war that really matters: the war on poverty. Our people are hungry, jobless and poor,” she said in a stinging criticism of Duterte.

In a separate statement, Robredo called the senator’s arrest the “latest move in a persistent campaign of political harassment” of a member of Congress.

The “efforts to smear” De Lima started when she launched an investigation of the extrajudicial killings linked to the anti-illegal drugs campaign, Robredo said.

She added that the charges against the senator, her Liberal Party (LP) colleague, had arisen “from a political agenda and are not the result of an independent, unbiased legal process.”

Judge Juanita Guerrero of the Muntinlupa Regional Trial Court issued the warrant for De Lima’s arrest on Thursday, a week after the charges were filed against her.

“We cannot, and we must not, stand by and let this happen again,” she said.

Opposition Rep. Edcel Lagman of Albay saw irony in the timing of De Lima’s arrest on the eve of the anniversary of the 1986 Edsa People Power Revolution that ousted Marcos.

“While the Edsa Revolution is a celebration of freedom and justice, the arrest of De Lima is an anthology of vengeance, fabrication and injustice,” Lagman said.

De Lima’s arrest was “a throwback to an authoritarian past,” said Sen. Risa Hontiveros of Akbayan party, an LP ally.

De Lima’s arrest would send “a chilling message” that political dissent under Duterte would not be tolerated and “all those who will oppose will be destroyed,” Hontiveros said.

However, Sen. Antonio Trillanes IV, another strident critic of the President, said he would not be intimidated.

“The effect to me is exactly the opposite,” he said. “I am now motivated more than ever to expose [the President] for being a plunderer and mass murderer that he truly is.”

Trillanes early this week presented SPO3 Arturo Lascañas, a confessed leader of the Davao Death Squad, who said the President directed and paid for the hit team when he was mayor of the city. Trillanes had also revived allegations that the President had P2.2 billion (US$43.9 million) in several bank transactions from 2006 to 2015.

LP Sen. Bam Aquino said the charges were brought against De Lima despite shaky evidence not backed by any “paper trail” and based mainly on testimonies of convicted criminals “who received favors” from the administration.

“It is condemnable that the administration railroads rules and processes for political vendetta,” he said.

Human rights lawyer Jose Manuel “Chel” Diokno, chair of the Free Legal Assistance Group, said he was “shocked and surprised” when the Muntinlupa court issued the arrest warrant so soon because it preempted hearings set on Friday on her motion questioning its jurisdiction.

De Lima’s lawyers argue that she should have been charged in the Sandiganbayan as her alleged offenses were committed while she was justice secretary. Those charges should also have been investigated by the Ombudsman, not the justice department.