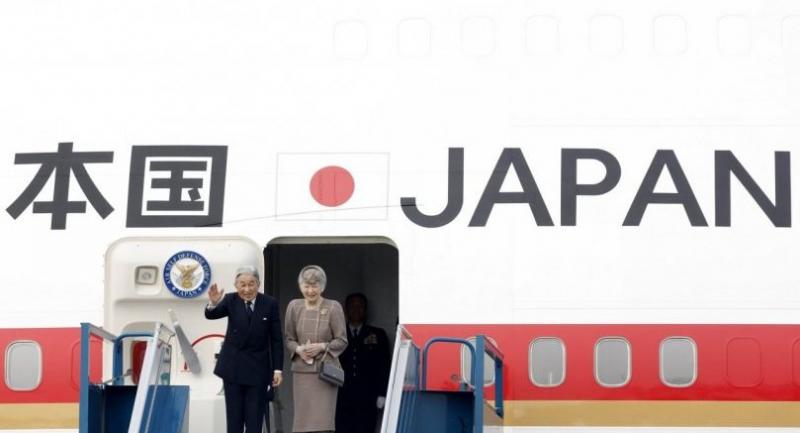 THEIR MAJESTIES Emperor Akihito and Empress Michiko of Japan arrive in Thailand today to pay homage to His Majesty King Bhumibol, who died last October, and meet His Majesty King Maha Vajiralongkorn to strengthen traditional relations between the two royal families.

The Imperial couple’s visit, regarded as a goodwill trip to the Kingdom, marks the 130th anniversary of diplomatic relations between Thailand and Japan.

Emperor Akihito and Empress Michiko are due to arrive this afternoon and shortly after are scheduled to lay a wreath and sign a condolence book for the late King Bhumibol at the Grand Palace.

Japan’s Prime Minister Shinzo Abe said recently during an announcement of their visits that the Emperor and Empress will pay a condolence visit to Thailand to show respect for HM King Bhumibol’s tremendous leadership for the development of friendship and goodwill between Japan and Thailand.

They will later meet with HM King Maha Vajiralongkorn at Amphorn Satharn Villa at Dusit Palace.

Emperor Akihito and Empress Michiko have had a cordial relationship with the Thai royal family for more than half a century. In December 1964, when they were Their Imperial Highnesses the Crown Prince and Crown Princess, the royal couple returned a visit on behalf of Their Majesties the Emperor Showa (Hirohito) and Empress Kojun (Nagako) in response to a visit to Japan by King Bhumibol months before.

Emperor Akihito took the throne in 1989. He chose Thailand for his first foreign visit after he became emperor – being welcomed in Bangkok in September 1991. King Bhumibol gave him the most auspicious order of Rajamitrabhorn, which is Thailand’s highest royal order. The Empress Michiko also became a Dame of the Order of the Royal House of Chakri.

The Emperor Akihito and Empress Michiko were in Thailand again in June 2006 to attend the 60th anniversary celebrations that marked King Bhumibol’s accession to the throne.

The Thai royals forged close relations with the Imperial Palace long ago. King Bhumibol began ties with the Japanese Emperor and Empress when he visited Japan as a state guest in May 1963.

The then Emperor Showa and Empress Kojun were seen in an old archive welcoming Their Majesties King Bhumibol and Queen Sirikit when they were stepped down from their aircraft. Crown Prince Akihito was also there to receive the royal visitors from Thailand.

Like the Japanese Emperor, HM King Maha Vajiralongkorn has made close relations between the two royal families since he was Crown Prince and represented the Thai royal court when he attended the Imperial funeral of Emperor Showa in February 1989.

HM the King, while Crown Prince, visited Japan again in November 1990, when the ceremony of accession was held for Emperor Akihito.

Among other Imperial family members, Prince Akishino has frequently visited Thailand. With the cooperation of Princess Maha Chakri Sirindhorn, he has done research into the process of domesticating chickens. Meanwhile, Crown Prince Naruhito was in Thailand in 2012 for a trip that also took him to Ayutthaya.

While royal families of both countries are above politics, their relations and visits to each other are regarded as a precious gesture for relations between the two. Thailand and Japan are ‘strategic partners’ now in economic, security and political matters in bilateral and multilateral ties. The two countries also cooperate to encourage development in the Mekong region states.

The Imperial couple’s visit to Thailand is part of a week-long tour to the Mekong region, which took them to Vietnam five days ago.

The 83-year-old Emperor spent time seeking to soothe any lingering wounds from World War II. He undertook similar efforts on a trip to the Philippines last year.

Thailand is the only country in Southeast Asia which appears to have few grievances with Japan from the traumas of the war. The Imperial couple is due to leave Bangkok for Japan on Monday afternoon.