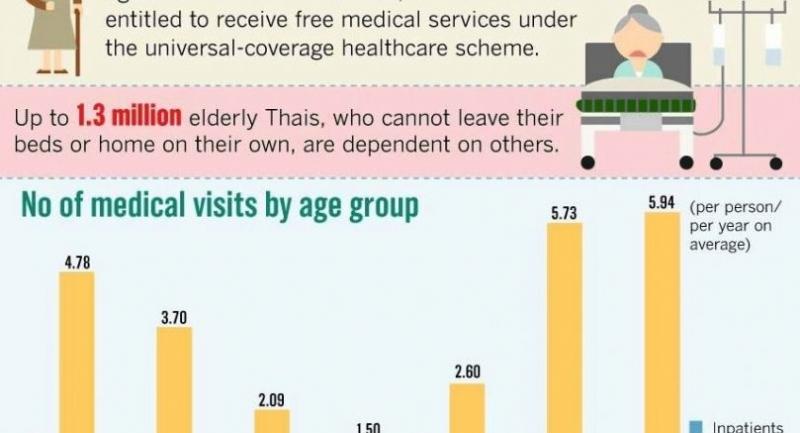 OF ABOUT 1.3 million housebound and bed-bound elderly people, just a little over 10 per cent have received long-term care services from the state.

This year, the government has approved a budget of Bt900 million to deliver services to 150,000 elderly dependants.

Although the long-term care (LTC) services are far from extensive, the project marks a step forward for elderly care at the time when Thailand is becoming a full-fledged ageing society.

An “ageing society” refers to a country in which at least 10 per cent of the population are over 60 years of age. As of last year, 14 per cent, or 10.67 million, Thais were elderly.

Each caregiver takes care of between one and 10 elderly people in their community.

The NHSO launched the LTC project last year but Chuchai said his agency had yet to assess the outcome.

“We definitely will need to follow up and see if the project has fulfilled its objectives. We expect caregivers to ensure the dependent elderly can live well. For those who are bed-bound, caregivers should help move their body so as to help prevent bedsores,” Chuchai said.

The government has earmarked Bt5,000 per head of covered elderly to caregivers per year. The services of caregivers are planned and monitored by care managers.

Care managers and tambon-level hospitals have shared the budget of elderly care at Bt1,000 for each covered elderly person per year.

Last year, the government allocated Bt600 million for the LTC project to cover about 100,000 elderly people who have the right to medical services under the country’s universal coverage healthcare scheme. This year, the budget has risen to cover more people.

Chuchai said he hoped the government would be able to deliver better services to an increasing number of elderly people in the future.

“I think we can do that if we integrate efforts of all relevant authorities. The budget used will not be much higher either,” he said.

The operation has received the annual budget of Bt330,000 – of which Bt230,000 comes from the NHSO and the rest from the district office.

“We have provided elderly-care training to volunteer nurses, physical therapists and academics so that they can provide good services. Now, our LTC operations have become a model for nearby communities to follow,” Sukhontip said.

She added that the services were evaluated every Tuesday and Friday. “Our goal is to give better quality of life to the elderly dependants,” Sukhontip said.

Worawan said that aside from healthcare services, the government should help promote financial independence for the elderly too.