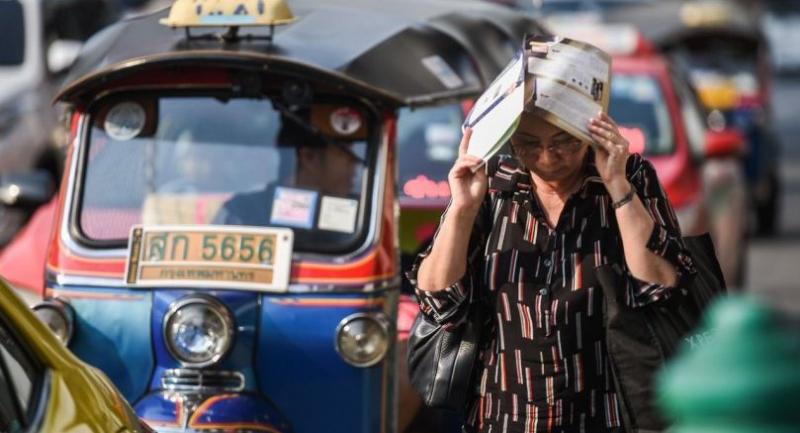 THAIS MAY BE familiar with hot weather, but it does not mean they are immune to heatstroke.

Every year, many people in Thailand, young and old, fall victim to heatstroke. On average, as many as 32 people die of heatstroke each year.

The risk is particularly high during the peak summer months, when the mercury often soars above 40 degrees Celsius.

From March 1 to April 17 last year, 21 people succumbed to heatstroke. Of them, 13 died in public areas and two in vehicles. On Tuesday, a 56-year-old woman collapsed while queuing at a temple under the scorching sun in Udon Thani province.

An investigation revealed that the woman had travelled from Chaiyaphum province and waited in a queue for a long time until she felt sick and collapsed.

On the same day, a 77-year-old cyclist collapsed during his normal cycling routine in Nakhon Phanom province. Police said although he too was rushed to a nearby hospital, he passed away.

“We believe his death is related to heatstroke,” Pol Captain Chularat Apirom, a deputy inspector at the Muang Nakhon Phanom Police Station, said. She said relatives had already taken his body away for funeral services and they did not suspect any foul play.

The Disease Control Department has warned people to avoid going outdoors when the weather is very hot. People who need to carry out activities under the sun are advised to wear a hat or use an umbrella and also drink lots of water.

It is predicted that temperatures will soar as high as 43 degrees Celsius over the next seven |weeks.

The ministry’s permanent se-cretary, Dr Sopon Mekthon, recommended that people should drink two litres of water a day during summer to lower the risk of heatstroke.