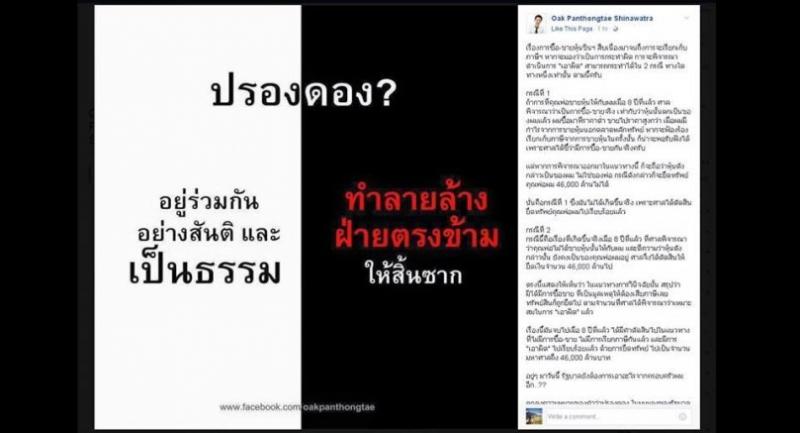 Panthongtae Shinawatra, the son of fugitive former premier Thaksin, on Thursday bemoaned the attempts being made by the junta to collect back taxes from his father over the controversial sale of Shin Corp in 2006.

Last Tuesday, the Prayut Cabinet asked the Revenue Department to seek back taxes, which could amount to Bt16 billion, from Thaksin .

“Oak” Panthongtae Shinawatra posted on his Facebook that the case had already ended eight years ago and the court had ruled that his father had not sold the shares to him and his sister Pinthongta and that Thaksin remained the owner of the shares.

He said Bt46 billion worth of his father’s assets had already been confiscated. That amount was enough to compensate for his guilt, according to the court ruling, he said.

“What more the government wants from my family?” he asked.

“In this government’s point of view, does reconciliation mean a complete destruction of its opponents and stomp them to death so only their associates are left and conflicts will disappear?” he asked.

“Or does it [reconciliation] mean giving justice to all groups so everybody can live peacefully together?”