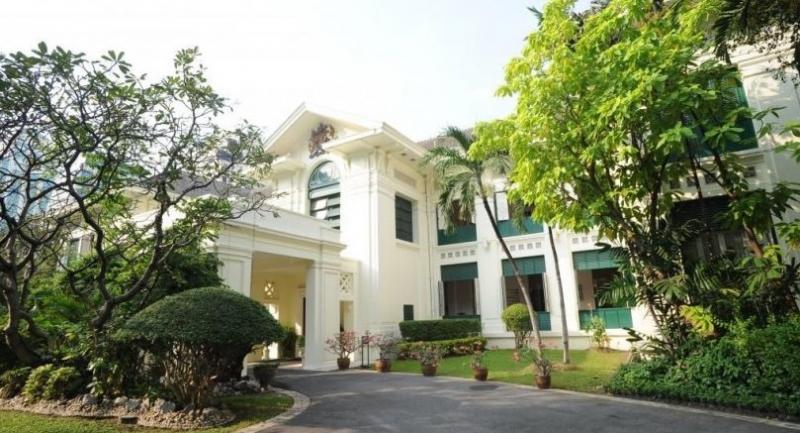 The future of the British Embassy on Wireless Road is most likely to be known within weeks.  But for the time being, the British Ambassador Brian Davidson can only say officially: “So far, no contract has been signed.”

However, the contract signing is only a matter of formality.  Davidson confirmed with The Nation that the sale of the property had been decided by the Foreign Office.  “The sale will go ahead,” he said.

The Embassy has been sounding out local property developers for quite some time. The 23rai (3.7hectare) plot of land, which houses one of Bangkok’s oldest diplomatic compounds and is located in one of the city’s most coveted areas, is reportedly valued at about Bt2 million per square wah (four square metres).

The compound has been a familiar sight for Bangkokians for decades with its unique buildings, tropical gardens, statute of Queen Victoria and the presence of Gurkha security guards. The front part of the original compound covering 9.5 rai was sold to the Central Group about 10 years ago and now houses the highend shopping mall Central Embassy.

Davidson told a group of journalists during a media reception on Tuesday night at his residence, which is located in the compound, that the decision to sell the plot was made “in the best interest of British taxpayers”.  He did not give a timetable but a senior British diplomat told The Nation that a formal decision should be known within five to six weeks.

Davidson dismissed earlier speculation that the embassy would continue to operate in the same location even after the development, adding that it would be relocated. “There is no point clinging to the past,” he said.

“To sell the embassy is an insult to the Thai people. This land was given to the British people. To close the embassy just to make money is disgusting and makes me ashamed to be British,” posted one supporter of the petition