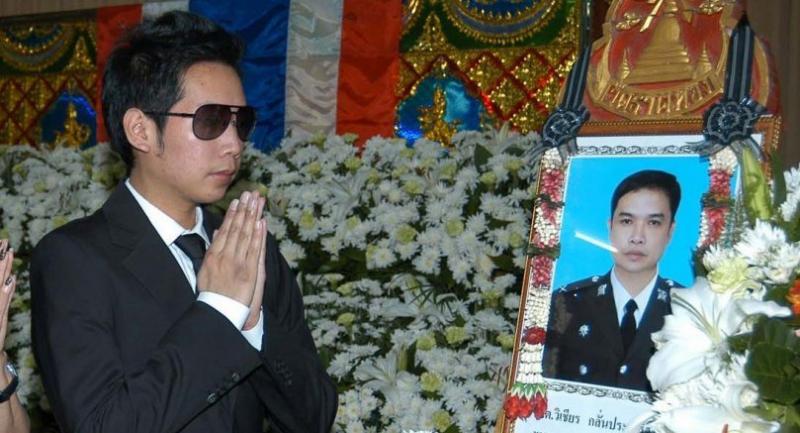 PUBLIC PROSECUTORS yesterday seemed to show mercy to the Red Bull founder’s grandson implicated in the 2012 hit-and-run killing of a policeman in the heart of the capital, postponing a decision whether to indict Vorayuth Yoovidhya once again.

The case has been postponed until April 27, Office of the Attorney-General deputy spokesman Prayut Phetkhun said yesterday.

A decision on the indictment had been scheduled for yesterday when Vorayuth – who has been living a lavish lifestyle overseas according to news agency reports – was supposed to present himself to prosecutors. However, his lawyer filed a letter with the Southern Bangkok Criminal Court prosecutor’s office, saying Vorayuth was “preoccupied” in England.

The spokesman insisted that the Attorney-General had not been complacent about the case and was in fact trying to expedite it, but prosecutors were unable to indict Vorayuth because he had requested a postponement of the decision and failed to turn himself in to prosecutors.

The case would be clearer by the end of April, he added.

Vorayuth, a grandson of the late Red Bull founder Chaleo Yoovidhya, allegedly smashed his Ferrari into 47-year-old policeman Snr Sgt-Major Wichean Klinprasert and sped away, dragging the body down a Bangkok street for about 100 metres in September 2012. He was 27 at the time.

Vorayuth, who is widely known as “Boss”, then allegedly fled the scene and drove to his nearby house in Thong Lor. Police followed him to his house and demanded his surrender.

However, he initially refused and remained inside the house until senior police arrived at the scene with an arrest warrant.

His family later agreed to hand him in to police and Vorayuth was charged with reckless driving and causing the death of a policeman. He then walked free on bail amid widespread perceptions that the heir of a multi-billion baht fortune was being treated leniently by authorities.

The decision not to indict him follows a long series of failures by him to appear for court dates. His lawyer has consistently filed requests to delay meetings on the grounds that he was not in the Kingdom or was suffering from illness.

In the past week, media reports have shown that Vorayuth has not kept the low profile that might be expected from a suspect in the killing of a policemen. He has been documented enjoying a luxurious jet-set lifestyle, flying around the world on the Red Bull private jet and sometimes seen cheering the Red Bull Formula One team. It has not been hard to track him down in London, Laos’s ancient capital of Luang Prabang and even in Bangkok, where he faces charges.

The Attorney-General decided to indict him in April of last year but he had consistently failed to turn up in court, with his lawyer requesting postponements many times on the grounds that the suspect was abroad, Prayut said.

Vorayuth’s legal team also used delaying tactics by requesting the consideration of the Justice and Police Affairs committee of the National Legislation Assembly (NLA), which forced the Attorney-General to wait for the NLA’s committee investigation, Prayut said.

However, the committee has ended its investigation and the Attorney-General issued another summons for Vorayuth to meet prosecutors to inform him about an indictment yesterday, but then the office agreed to grant another postponement, Prayut said.

Although Vorayuth cannot be charged with speeding or reckless driving causing property damage because the statute of limitations for those offences has expired, there are still two valid charges that could be prosecuted, he said.