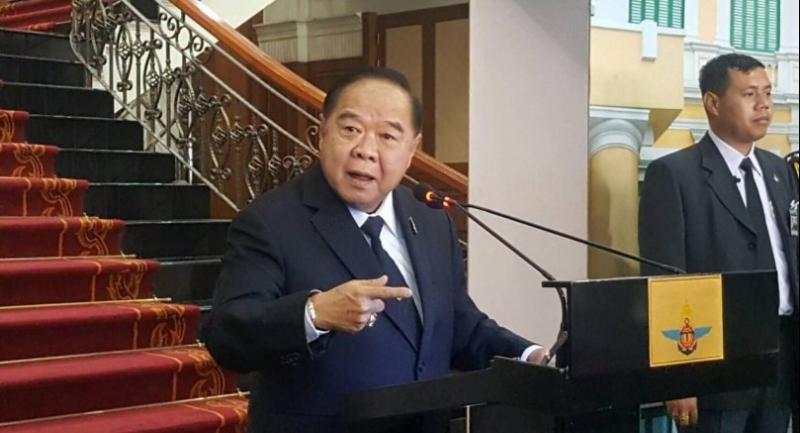 TIGHT CONTROLS on political parties and activities – that have been in place since the 2014 coup – may not be lifted even after the four organic laws required to hold the next election are completed.

Deputy Prime Minister and Defence Minister General Prawit Wongsuwan said the controls might stay in place because the country’s political situation has not yet settled down.

The government had been expected to relax the controls after the promulgation of the new Constitution, to allow political parties and politicians to campaign ahead of the next election, which is expected to take place by November 2018.

However, Prawit suggested that it would take more time before the rule would be relaxed.

“Things are still not alright now. We want more time and we want all the parties to help. Do not make trouble or it will be more difficult for us to make a decision,” he told reporters.

“I’m responsible for security issues. I need time to work on this and everyone should cooperate with us too,” he said. “It’s not going to work if things are stirred up like this.”

When asked if the restrictions would be relaxed after the necessary organic laws are passed, Prawit said that would be decided in the future and that he did not know yet.

He said the government was focusing on ensuring safety for the people and solving conflicts in the country to achieve national reconciliation.

After the coup in May 2014, the National Council for Peace and Order (NCPO) issued Order Number 7/2014 prohibiting political gatherings of five people or more, which in effect bans meetings by political parties. The order, which is treated as a law, was enacted amid unsettling deals among political fronts. It is still in effect.

Article 265 of the new 2017 Constitution, promulgated on Thursday, authorises the NCPO to remain in power until an elected government is formed and allows all of its orders to remain in force. Repeal of such an order is required to be done through an Act, according to a clause in the new Constitution.

Prawit stressed yesterday that the NCPO did not plan to back down on its orders, including those granted under Article 44 of the interim charter.

Meanwhile, Constitution Drafting Commission chairman Meechai Ruchuphan yesterday said implementation of Article 44 should be done more cautiously in a way that would not go against the new charter.

In a related development, international credit rating agency Moody’s Investors Service said political risk in Thailand has not changed much after new constitution.

A statement issued by Moody’s said that promulgation of the new charter represents a step towards normalisation, but political risk has not materially changed given the uncertainties related to the processes required to hold an election.