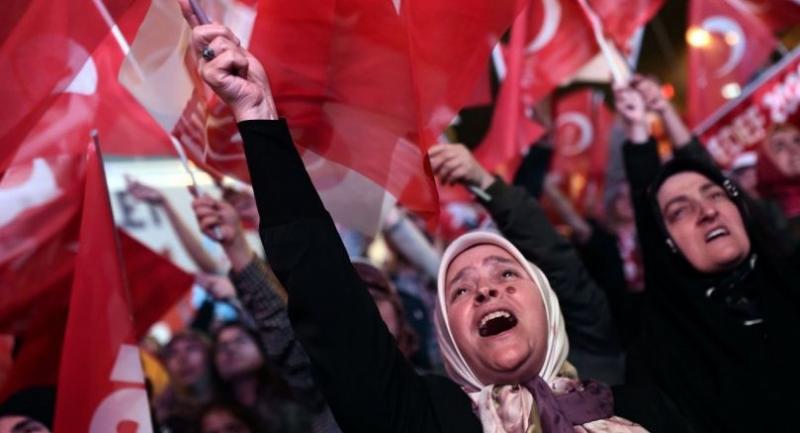 A woman supporting Turkish president waves a Turkish national flag as she celebrates during a rally near the headquarters of the conservative Justice and Development Party (AKP) on April 16, 2017/AFP

PARIS - Western leaders reacted cautiously, but with some concern, after Turkish President Recep Tayyip Erdogan's 'Yes' campaign emerged as the winner of Sunday's referendum on expanding the powers of his office.

Some capitals, such as London, were holding fire until hearing the opinion of the Organisation for Security and Cooperation in Europe (OSCE) which had observer mission in Turkey.

Others offered their first, cautious, reactions.

The EU urged the Turkish government to seek the broadest agreement after Erdogan narrow's victory on the sweeping constitutional changes that the opposition says risk authoritarian rule.

"In view of the close referendum result and the far-reaching implications of the constitutional amendments, we also call on the Turkish authorities to seek the broadest possible national consensus in their implementation," said a statement issued by European Commission head Jean-Claude Juncker, EU foreign affairs chief Federica Mogherini and EU Enlargement Commissioner Johannes Hahn.

Thorbjorn Jagland, secretary general of Europe's top rights watchdog, said that "in view of the close result" -- 51.3 percent voted with Erdogan according to near total unofficial results -- "the Turkish leadership should consider the next steps carefully".

It is of the utmost importance, said Jagland, "to secure the independence of the judiciary in line with the principle of rule of law enshrined in the European Convention on Human Rights".

Turkey is a full member of the Council of Europe, which "stands ready to support the country in this process", Jagland added.

Austrian Foreign Minister Sebastian Kurz, said on Twitter that "it shows how divided the country is; Collaboration with the EU will be even more complex".

Turkey is officially an EU candidate nation, although its accession process has been moving at glacial pace for years, when it has moved at all.

A NATO official said that the constitutional referendum in alliance member Turkey "is a matter for the Turkish people".