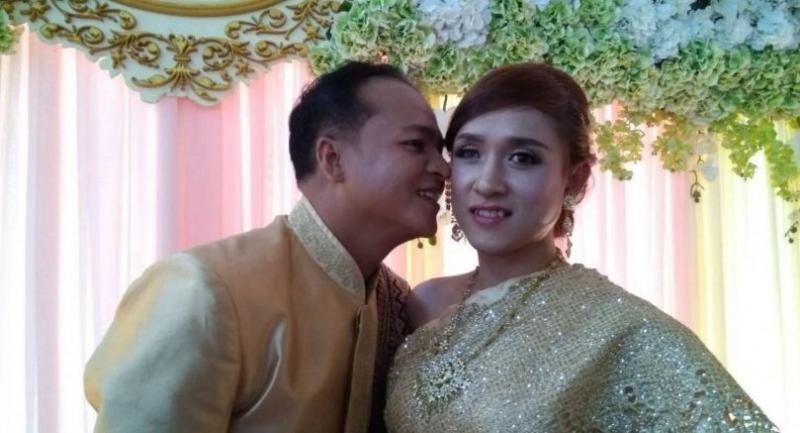 A 38-year-old man from Nakhon Si Thammarat married his 36-year-old male “bride” in Phitsanulok on Friday after “her” illness left her blind, causing them to stay apart for years.

The marriage of Notthapich Thanatsirichote, the groom, and Nawin Prathumsut, the “bride”, became the talk of the town in Phitsanulok’s Nakhon Thai district.

The ceremony was held at the meeting hall of the Kasetrat Bamrung School in Tambon Banyaeng.

Notthapich recounted that he came from Nakhon Si Thammarat to study in Phitsanulok where he met Nawin. They became friends and eventually partners before going to work in Pattaya together in 2003.

Later on, Nawin became ill and fell into coma. Notthapich said Nawin woke up three months later but the illness caused him to lose his eyesight. Being blind, Nawin decide to return to his home to Phitsanulok in 2007 after which the two stayed apart and lost contact.

Notthapich said he recently contacted Nawin again out of his love and attachment for him. The two decided to resume the relationship and eventually agreed to get married.

Nawin said he decided to get back with his male partner because they had shared suffering and happiness for years and they always helped each other to over come all sorts of obstacles.

Nawin said Notthapich proposed marriage after they resumed talks over the phone a month ago.