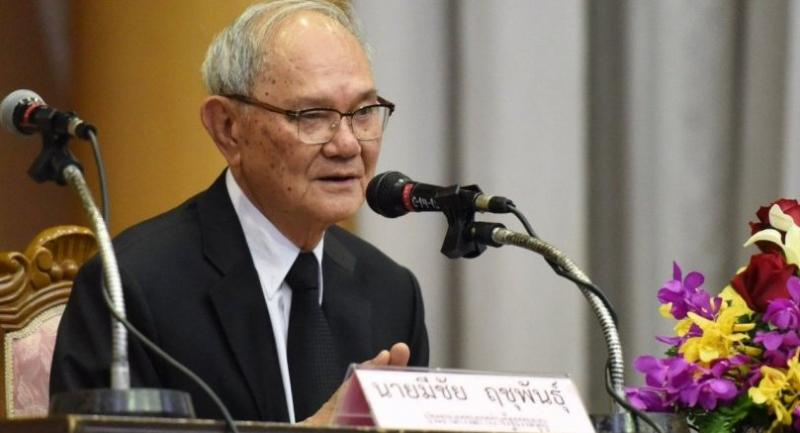 The chairman of the Constitution Drafting Commission (CDC) said on Monday that the controversial political-party membership fee had been supported by more than 70 per cent of people surveyed by the National Statistics Office.

Meechai Ruchupan said the CDC had drafted the law in line with the opinions heard during the survey, and dismissed politicians’ criticism that the fee would only burden members of the public.

“People can think way beyond politicians whose perspectives remain unchanged despite the dynamic world,” he insisted, adding, “If politicians resist change, they will be left behind if anything happens.”

The chief charter drafter also refuted politicians’ complaints about the supposed difficulty of fee collection, questioning how they could run the country if they were unable to undertake the task of collecting their parties’ membership fees.

In response to reports that the National Legislative Assembly might cut the membership fee from Bt20 to Bt10, Meechai said the minimum number of members would then have to be increased in order to ensure that each party had sufficient capital funding of Bt1 million.

Deputy Prime Minister Wissanu Krea-ngam on Monday expressed support for the stipulation of a fee for party membership, reasoning that the payment would help increase the sense of ownership of a party among the public.

Each political party needs true and honest members and, as it should belong to the people, its establishment has to be more difficult than setting up a cooperative or an association, he added.

Wissanu also said that in the past there had been instances in which some parties had no members, but still received funding from the government, or where some parties had a small number of members of Parliament but received more funding than those with more MPs.

The new political-parties law, with its restrictive regulations, would help eradicate these problems, he suggested.