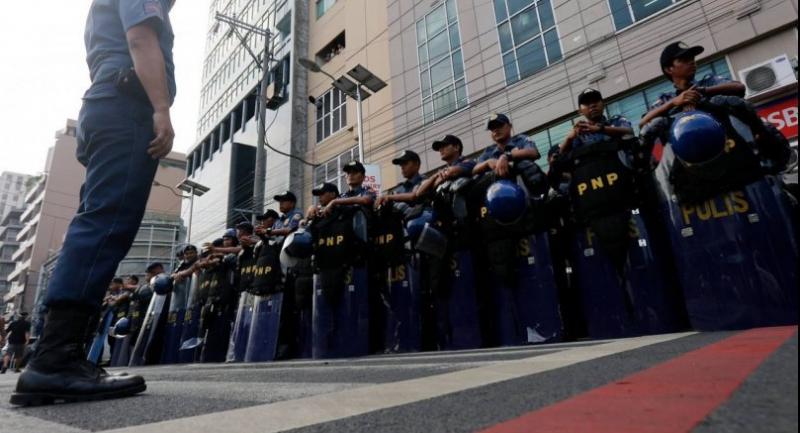 Filipino anti-riot police stand in formation as they wait for protestors marching toward the vicinity of the Association of South East Asian Nations (ASEAN) Summit venue in Manila, Philippines, Friday. EPA

MANILA- Southeast Asian countries will express "grave concern" over North Korea's nuclear weapons tests and ballistic missile launches, despite Pyongyang's appeal for support, according to a draft statement due to be released Friday.

In a rare move, North Korean Foreign Minister Ri Yong-Ho wrote to the ASEAN regional bloc's secretary general appealing for backing in its row with the United States to prevent what it warned could be a "nuclear holocaust".

But Association of Southeast Asian Nations foreign ministers meeting in Manila on Friday were expected to criticise North Korea for its two atomic weapons tests last year and subsequent launch of ballistic missiles, according to a draft of their statement obtained by AFP.

"ASEAN expresses its grave concern over the escalation of tension in the Korean Peninsula," said the draft statement, which is due to be released after the ministers end their meeting on Friday.

"ASEAN is mindful that instability in the Korean Peninsula will have serious impact to the region and beyond."

The ministers will "strongly" urge North Korea "to fully comply" with UN Security Council resolutions and international laws, according to the draft.

However, ASEAN will also urge "all parties concerned" to "cease all provocative actions and exercise self-restraint to de-escalate the tension and refrain from actions that may aggravate the situation".

Diplomats in Manila said the other parties apparently refer to the United States and regional powers China, Japan and South Korea -- all key strategic players in the region.

ASEAN leaders are then due to meet on Saturday, when the situation on the peninsula is also expected to be discussed.

In his letter to ASEAN, a copy of which was obtained by AFP on Thursday, North Korean foreign minister Ri warned the situation on the Korean Peninsula was "reaching the brink of war" because of Washington's actions.

Ri urged the ASEAN chief to inform the ASEAN foreign ministers "about the grave situation" on the peninsula "and give them a proper proposal", while criticising at length US-South Korean military exercises.

Tensions have soared in the region in recent weeks in the wake of a series of North Korean missile tests and tough rhetoric from Washington on the isolated nation's rogue weapons programme.

Washington has deployed an aircraft carrier strike group to the Korean peninsula amid signs the North could be preparing for a sixth nuclear test, and US officials have said all options were on the table.