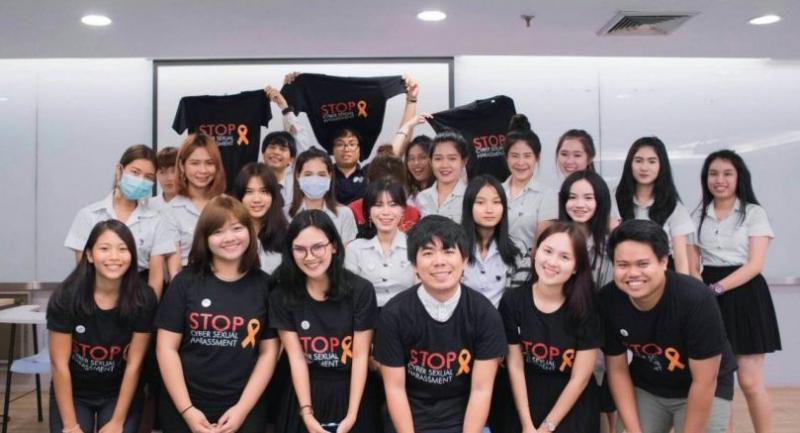 Students of the Nation University join a campaign to stop sexual harassment in the online world.

The campaign has called on people to take a stand against sexual abuse.

The hashtags are one facet of the campaign, which includes other activities in the hope of making clear that sexual harassment, even online, is not acceptable.

“Some people think the problem is not serious, but this problem has significant psychological impacts on victims. We can’t allow cyber-sexual harassment to go on as a silent threat,” Cheevin Soonsatham, a deputy dean of the Nation University’s Faculty of Communication Arts, said yesterday.

Conducted in collaboration with EdVenture Partners, the campaign is a response to Facebook’s invitation for higher-education institutes across the world to implement “Stop the Violence” projects via online media. The projects can be submitted in a competition whose results will be announced on June 16.

Cheevin said his university had focused on sexual harassment on the Internet because it was disrespectful when people blatantly asked in online comments if they could have sex with a woman whose photo was posted online.

“We think people should write cute comments instead. Under our campaign, if you make nice comments, you stand a chance of winning a free T-shirt,” he said.

The campaign is using an orange ribbon as its symbol, while well-known TV host Teera Tanyapaibul has thrown his support behind the effort.

“We have handed out ribbons to first-year students at Nation University and explained the rationale of our campaign. We hope they will post their photos with the ribbon on to raise public awareness of the need to fight cyber-sexual harassment,” he said.

Apichanan Leenantachart, a presenter for the campaign, said if cyber-sexual harassment became too common, respect between men and women would decline.

“Such forms of harassment may indirectly encourage sexual crimes too,” she said.