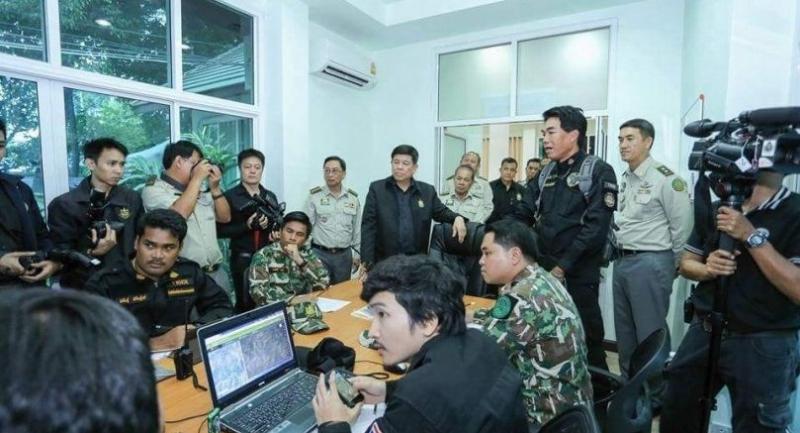 The government has initiated a new forest-protection operations centre to crack down on encroachment and exploitation. New director Athapol Charoenshunsa, who heads the Royal Forestry Department (RFD)’s Forest Protection and Fire Control Bureau, tells The Sunday Nation’s Piyaporn Wongruang why the new agency is desperately needed.

Forest encroachment and exploitation here is complex by nature. Generally, it involves influential figures or criminal gangs who operate in a sophisticated manner. As such, forest officials have to possess knowledge in various fields as much as a solid legal background so that they can look into evidence and understand what went wrong. Besides strong knowledge and a legal background, they must also be sophisticated in investigation work so they can obtain evidence to counter wrongdoings. This is to meet our goal that wrongdoers get the punishment that they deserve.

To suppress forest crimes, you need multi-disciplinary skills. This has long been our shortcoming because in reality we all have limited knowledge and skills to pursue cases. This is not to mention that we also have limited authority to do so, as forest crimes have become so sophisticated with complex operations, including money or property laundering, for instance, involved.

SO, HOW HAVE CONCERNED AUTHORITIES ATTEMPTED TO FIX THIS PROBLEM?

We forest officials have realised our shortcomings. We at the Forestry Department and the Department of National Parks [DNP], as well as the Marine and Coastal Resources Department [MCRD], have tried to fix our flaw by coming up with special task forces. Now, we have the DNP’s Phaya Sua, the RFD [Royal Forest Department]’s Phayak Prai, and the MCRD’s White Sharks to boost our work capacity. This has been working well for areas where our authority is overlapping as we can join hands in forest-crime suppression operations. But still, as I said earlier, the crimes have got so complicated that they need other bodies with knowledge and specialisation to help address them.

IS THIS BECAUSE THE MASTERMINDS ARE ALSO INFLUENTIAL?

Yes, it’s true that a number of them are influential. Moreover, they are knowledgeable, knowing well about legal loopholes and that’s the reason why they can exploit them for their own benefit.

That’s the reason why we have tried to boost our work efficiency so that we can somehow keep pace with them.

AND THIS IS THE REASON WHY THE NEW |CENTRE WAS ESTABLISHED?

Yes. The new centre acts as a place where multidisciplinary knowledge and authority will be integrated to support the operation of the three taskforces. We will pull them together to back up the taskforces. This is something that I call, “the precious”.

HAVE YOU SEEN ANY DIFFERENCE IN WORK RESULTS?

As we have tried this approach, we have begun to see better work results. Recently, I led the team to tackle transborder illegal logging in Nan and Phrae provinces in the North. We managed to not only arrest the illegal loggers, but track the masterminds through their money laundering activities. For illegal land-deed forgeries and such sluggish court cases, with the new work structure established, we can now forward the cases to concerned authorities higher than us.

These include the newly established steering panel on forest encroachment and prevention of exploitation and suppression, which can help expedite the cases via work coordination among top authorities of various departments and ministries who sit as members of the panel. If it’s a normal process, revocation of forged documents could take time, several years for one case, something that can never be on par with such sophisticated crimes.

We have to accept that for forest crimes, which generally involve influential figures, it is undeniable that there is always some bribery attempt to escape from the cases when they are pursued.

It’s fortunate that we have the panel, which acts as the centre’s administrative body to help and link us to higher authority under the National Council for Peace and Order, which can make a short-cut measure for us if needed.

This is the approach that helps us clear a great deal of previous obstacles. So, we hope that with the new centre, multidisciplinary knowledge and skills needed to help tackle forest crimes will be drawn together and united for more effective work results than in the past.

It’s not just law enforcement, but much more coherent work that is desperately needed to tackle our forest exploitation problem.

BUT IT IS STILL JUST ANOTHER TOOL THAT HAS NOT INVENTED ANYTHING NEW, BUT INTEGRATED KNOWLEDGE AND AUTHORITY NECESSARY FOR THE TASK. HOW WOULD THIS KIND OF WORK INTEGRATION BE SUSTAINABLE IN THE LONG TERM WHEN A GOVERNMENT HAS CHANGED IN THE FUTURE?

It’s true that the new centre is just the starting point, as our Natural Resources and Environment General Surasak Kanjanarat said. But as we continue working this way, I quite believe that we will become stronger and gain credentials enough to help sustain our work in the long-term.

The next government should see its importance and continue using the centre to suppress the problems that occur during its term.

In fact, the new centre and the sub-panel [appointed in April], have some legal ground to back them up as they have been established by the national forest encroachment and exploitation prevention and suppression panel, appointed by Cabinet. And its chair is our [National Resources and Environment] Minister General Surasak [Kanjanarat].

So, you may be able to see now how the work will run in the long-term.

STILL, IT’S JUST ANOTHER TOOL THAT WE HAVE. DO YOU THINK WE NEED SOME KIND OF REFORM IN THIS SECTOR TO ENSURE LONG-TERM SUCCESS?

To protect our forests, suppression work that we do is just one facet. We actually need to work on other facets, which include forest protection, restoration, land-use management, and others. These all are something that need to be done in parallel with forest-crime suppression. What I said is actually addressed in the ministry’s policies and long-term strategies, 20 years, in line with the government’s [strategies].

But the bottom point is people, whether we can solve problems that concern a dimension in regard to people is always the challenge. They are all related – the poor who give themselves to serve influential figures in exploiting the forests because they are poor. This is something I would like to see stop, or ask them to stop.

They can be either be forest destroyers or protectors, and they should be supported to be the latter, helping us protect our forests.