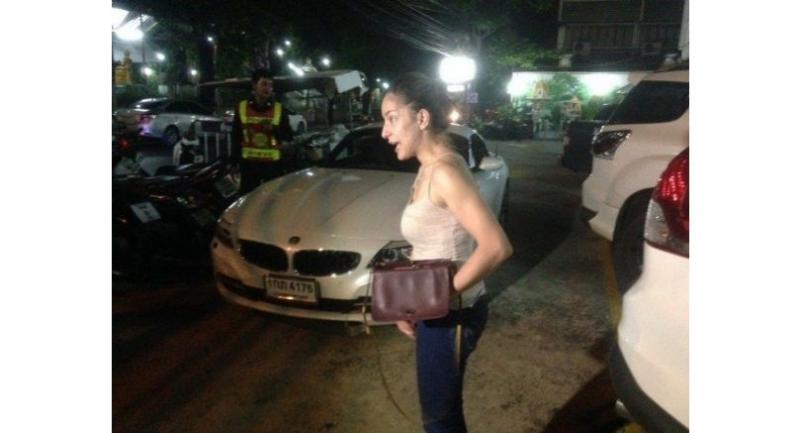 A Thai-British model and actress, who killed a policeman in a road crash in 2015, was arrested early Monday morning on charges of drink driving and hit and run.

Huay Kwang police were alerted about the alleged hit and run involving Anna Hamblaouris at about 1am and they spotted her on Soi Ratchada 7 about 500 metres from a pub and took her to the police station.

Her BMW Z4 was damaged on the right side on the front bumper.

Pol Lt-Colonel Alongkot Tubchom said the 30-year-old actress was apparently under the influence of alcohol and was crying foul and crying and could not give testimony.

Anna, who is well known among Thais as Anna Reese, also cried and shouted when seeing reporters and cameramen turning up at the police station.

Alongkot said he was informed by a pub on Culture Road in Huay Kwang that the actress allegedly got drunk and destroyed property in the pub before trying to flee in her car, which crashed into the rear of a vehicle of a patron of the business.

On June 26, 2015, Anna made headlines when her Mercedes-Benz crashed into a vehicle of a policeman from Suphan Buri province, who parked his car on a motorway in Prawes district to rest late at night. The policeman died at the scene.

At that time, Prawes police came under social criticisms for failing to conduct an alcohol test on the actress, and possibly allowing her to escape severe penalties. She was sobbing at the scene at that time and police did not take legal action against her.