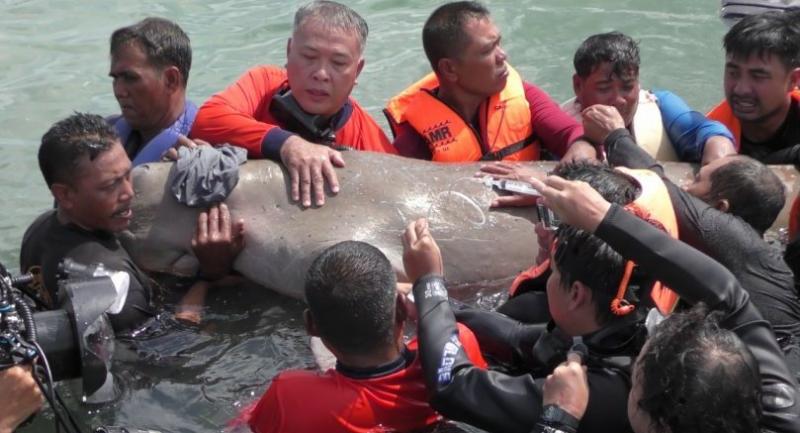 Chulalongkorn University Veterinary Medical Aquatic Animals Research Centre director Nantarika Chansue has said that a scheme to fit dugongs with satellite transmitters was not harmful to the animals.

She also said the tracking programme would benefit future research and conservation of the marine mammals in the Trang Sea and help to reduce mortality rates.

Nantarika’s comments on Monday followed an earlier announcement by the Pathum Thani-based National Science and Technology Development Agency (NSTDA) on its website that it would suspend the fitting of transmitters on to dugongs at Hat Chao Mai National Park’s Koh Mook on the grounds that the technology was involved in unresolved disputes over reported negative impacts.

The NSTDA, which is sponsoring the research project, said it had decided to end the tracking programme while urging stakeholders to contribute to the sustainable conservation of dugongs. Chulalongkorn veterinarians had been participating in the project by conducting health checks and collecting blood samples.

Nantarika said the research team prioritised the safety of dugongs, while research methods were subjected to careful scrutiny and conformed to international standards.

She also cited medical reports that showed the stress hormone levels in dugongs’ blood did not exceed normal levels as they were fitted with transmitters.

“While people might feel otherwise, the scientific test gives clear evidence [about the dugongs’ stable health],” she said adding that officials had not just relied on data from the trackers but had dived with the dugongs to observe their behaviour.

She said the data on dugong behaviour and migration patters would help to formulate a better conservation strategy based on zone management. She added that many villagers had joined in conservation efforts to ensure dugong habitat would not be disturbed by human activities.

Dugong deaths that had been blamed on the satellite transmitters were actually caused by them getting caught in fishing equipment, Nantarika said, adding that fishermen should refrain from casting nets in conservation areas if they wanted to spare the marine mammal.