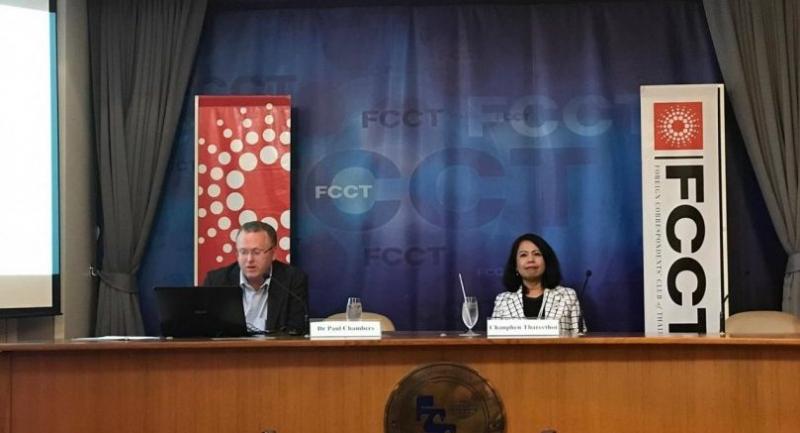 The Royal Thai Navy’s purchase on a Chinese submarine contributes to Thailand’s increasing dependency on the eastern country as well as the military’s growing budget trend, a security expert said on Wednesday.

Paul Chamber, a security analyst and lecturer on international affairs at Naraesuan University, said the Thai military would see parades of Chinese military hardware as well as the three Bt36-billion Yuan Class S26T submarines the Navy set to obtain within the next 11 years.

The first Bt13.5-billion submarine’s procurement was approved by the junta government in late April for the Navy to open a seven-year-binding agreement with a Chinese state-owned company a few weeks later. Among the coming hardware are 10 Chinese VT-4 tanks, to which the Army is processing procurement proposals, Chamber said.

He said the multi-billion baht purchase would mark the start of China’s role as a new principal source of military hardware to Thailand.

“China and Thailand would have personnel exchanges for training on the submarines. The two countries have also increased joint military exercises since the 2014 coup,” he said.

They will also set up a joint military production facility in Thailand to manufacture and repair arms and weapons parts, he added.

This could also have a potentially political element, considering China’s One Belt One Road policy which has attracted the Thai junta, considering that its 99-year land lease policy would benefit the Eastern Economic Corridor, he said.

“By getting close to China, the junta has potentially increased Thai dependency on Beijing, while being perceived as China’s ally by Asean states vying for claims over the territories in the South China Sea,” he said.

Chamber spoke at a panel discussion on the submarines held by the Foreign Correspondent’s Club of Thailand on Wednesday.

Thailand has also followed a pattern of year-by-year defence budget increases since the 2006 coup, he added.

While the Navy and Air Force generally receive less than half in budgeting than the Army receives, the tied-over military budgeting together with the junta-drafted 20-year strategic plan could oblige future governments to support more money for the military, Chamber said.

The Navy also claimed that the submarines would help protect security and resources in the 320,000 square kms of Thai sea area in the Andaman Sea and Gulf of Thailand, maintaining military capabilities and keeping up with neighbouring countries, given that Thailand did not own any submarines for over six decades.

The claims were made despite criticisms that the Thai economy is not healthy enough for such extensive military spending, Thailand’s geographical inappropriateness for the submarine operation, as well as alleged "connections" between the Navy and the junta government, Chamber said.