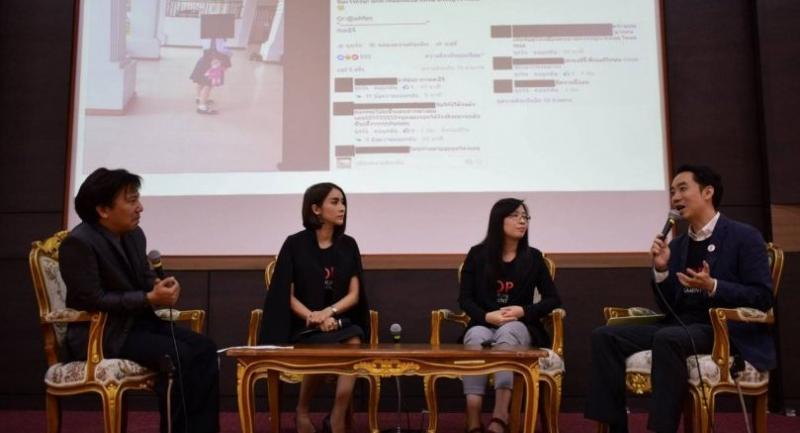 IN A move to stop sexual harassment online, Nation University joined forces with the National Institute of Development Administration (NIDA) to host a recent seminar urging people to stop and think before posting comments and to remain aware when browsing the Internet.

The seminar, held at NIDA campus’ Navamindradhiraj Building on Wednesday, was part of the “Stop Cyber Sexual Harassment” peer2peer campaign by Nation University in collaboration with EdVenture Partners following a Facebook invitation for higher education institutes to carry out campaigns to end violence via online media.

They also discussed how people should react and what can be done to prevent such behaviour from spreading.

Benjaporn said such harassment could be done against anyone from anywhere and the information could spread widely.

She said victims could suffer from depression, loss of self-esteem/confidence, anxiety leading to self-inflicted wounding or suicide, while offenders walk free because they could do this anonymously.

“We have to raise awareness so people are careful when posting any picture or comment that could lead to harassment. People could set the posts to be seen among those they trust rather than making them public,” she said.

Sukontawa agreed that such an issue could easily |happen to anyone, not just teenagers, due to people’s easy access to others’ Instagram and Facebook pages. People should be careful in posting things and to dress appropriately [in online images], she said.

She urged people with sexual obsessions who might use social media to release their urges to take up other constructive activities such as sport and music. She also urged artists to aim to be good role models to society.

Warat said mainstream media could help by being careful and upholding professional ethics when publishing reports that could be quoted by online media. Stories should present more positive aspects so as to prevent any subsequent abuse or sexual harassment.