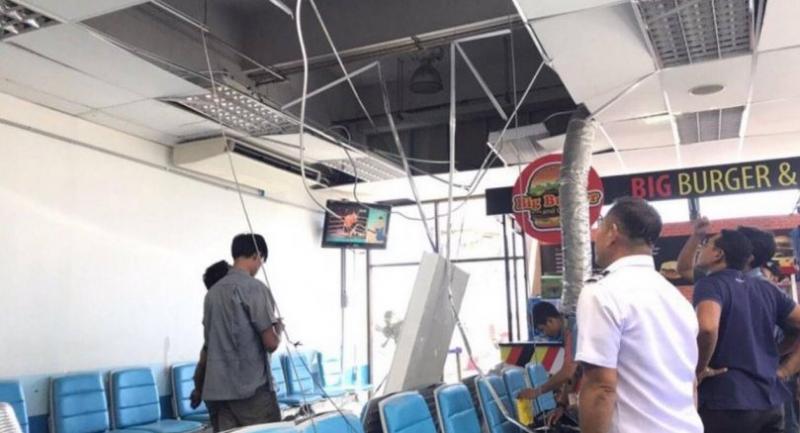 A LARGE section of the false ceiling at Phuket International Airport collapsed yesterday, leaving an airline passenger with a head injury.

The airport’s management blamed the incident on deterioration caused by long-term use. The injured passenger was identified as 59-year-old Phuket resident Bancha Sa-nguan-nam, who was waiting for a Nok Air flight to Bangkok when the accident in the domestic departure terminal.

Several false-ceiling plates fell from their hanging steel frames at a passenger waiting area between Gates 81 and 82.

The man received first aid from airport staff before being taken to Thalang Hospital for treatment. A bloodstain was seen on his sweater and the upper part of his head was covered with bandage.

The airport’s director, Monrudee Gettuphan, said yesterday the area where the incident occurred had been closed off so an investigation could be carried out. She said many areas of the building were dilapidated after years of use.

She apologised about the accident and said more frequent checks would be done to prevent a repeat of what happened.

The airport management has worked with Nok Air to ensure the injured man would get a full refund on his ticket, an airport official said.