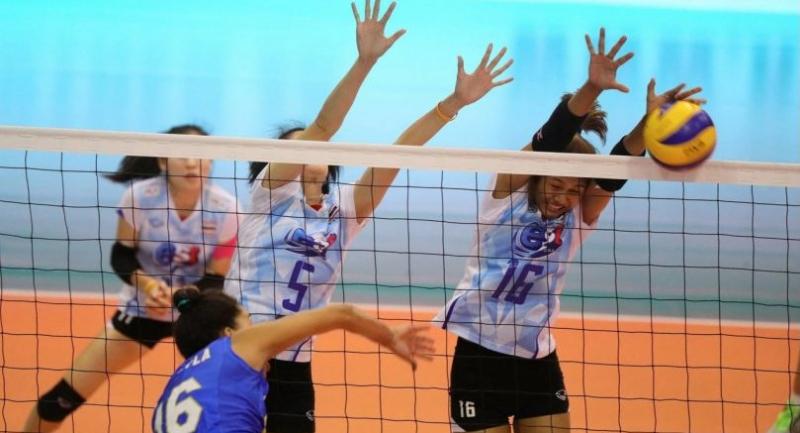 Tandara Caixeta and Adenizia were the stars for Brazil as they sealed their place in the semi-finals of the 2017 Montreux Volley Masters in Switzerland as Pool B winners with a 3-1 (16-25, 26-24, 17-25, 14-25) win over Thailand, thus ending Poland’s hopes despite their earlier win over Germany.

Brazil went into the tie nonetheless needing a positive result to seal their spot in the last four, but Thailand, now playing for little more than pride after two opening defeats, didn’t let the South Americans have it all their own way.

Pimpichaya Kokram, who has enjoyed a fine tournament for Thailand, eager to cause trouble with her spiking. Carol held the aces for Brazil in the first set, however, hitting six points including a serve ace to help power the Selecao into a 10-17 lead. Eventually the first set was an academic affair, Brazil determined to guarantee the result they needed to progress, and their professionalism shone through as they took the first set 16-25.

Brazil weren’t eager to endure another five-set slog against the Thais and just as they did in the first set, they steamrolled into a lead, Tandara and Adenizia causing the last year’s silver medallists problems with their combination of spikes and blocks. But the Thais, buoyed on by their large contingent of travelling fans, weren’t going to let the South Americans have it easy, Chatchu-On Moksri’s hitting seven points to help the Asians restore second set parity at 21-21. Shaken by the comeback and perhaps by the noise of the raucous crowd, Brazil buckled and conceded the second set 26-24, their semi-final place still very much at stake.

But this was still to be Brazil’s day. Tandara and Drussyla hitting a combined ten points in a ruthless set as Brazil built a 7-16 lead. As if that was not enough, Rosamaria Montibeller was thrown into the fray to add some stability to the Brazilian ranks on court, and she instantly scored with a stunning spike with her first touch after entering play. Natalia had the privilege of sealing set point, a smash wrapping up a 17-25 set, and a fine round of play from the Brazilians.

Rosamaria remained on field, and her calm, assured influence on field showed itself in abundance. She struck six points in the fourth set, the strongest total of the set, as the Selecao sought to finish the game early by putting their shellshocked opponents firmly to the sword. Rosamaria’s spiking and Adenizia’s blocking show putting the set to bed at 14-25, coasting Brazil into the last four in some style, and on this showing, they may well take some stopping. Their opponents on Saturday will be China, the eventual runners-up of Pool A, with a place in the final at stake.