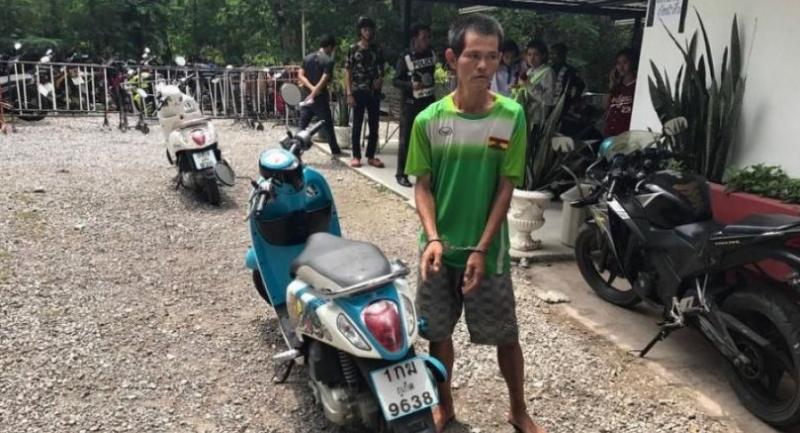 The suspect, 42-year-old Suraphol Punpek, had earlier this year been released from jail where he was serving a sentence for theft. Photo: Kritsada Mueanhawong

PHUKET: Police arrested a motorbike thief at Saphan Hin in Phuket Town yesterday, about six hours after he made off with a bike that had been parked at Dragon’s Monument in Talad Yai.

The suspect, 42-year-old Suraphol Punpek, had earlier this year been released from jail where he was serving a sentence for theft.

The incident occurred sometime between 4am and 7am. The victim, a 17-year-old girl, told police that she had parked her bike near the monument with the key still in the ignition. She came back at about 7am to find it gone.

Phuket City Police officers scanned CCTV footage from nearby cameras to track the suspect’s movements, but it was the victim herself who found the bike parked at Saphan Hin at about 1pm the same day.

She called police to inform them, who then arrived with a team of officers to await the suspect.

Gen Preerayuth Karajaydee of Phuket City Police led the team that made the arrest. Suraphol admitted to taking the bike, but said his intention had been to merely ‘borrow’ it. He also said he had done this before and been arrested for it.

“I was searching for a bike that had the key still in the ignition so that I could take it for a drive. I have no job and nothing else to do,” Suraphol told the police.