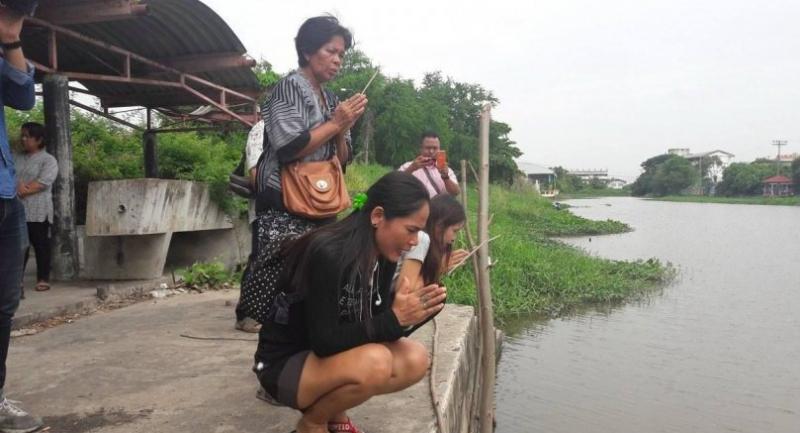 Relatives pay respect to the soul of the victim Thursday.

The girl found dead in Samrong Canal in Samut Prakan’s Bang Saothong district on Sunday died from suffocation before she was dumped in the water, Institute of Forensic Medicine director Pol Maj-General Dr Pornchai Sutheerakun confirmed on Thursday.

On Wednesday, Supaporn Nonthra, 31, confessed to killing her 10-year-old daughter last week after the girl’s stepfather Wajaran Tadsawan, 35, implicated her in the killing and admitted that they both disposed of the body by weighing it down with concrete blocks in a sack and dumping it in the canal.

However, in the pair’s account, Supaporn had hit the girl with a wooden stick for being “stubborn” and Wajaran later found her body after returning from work. In their account, there was no mention of suffocation.

The medical examiner said he had not determined whether she was sexually assaulted as the body had been in the water too long, he said, citing initial autopsy results.

Pornchai said the girl was killed three days before the body was discovered and she sustained bruises on her head, the backs of her hands and right inner thigh. She also had cuts on both thighs, which possibly resulted from the body being hit by boat propellers.

The couple faces charges of conspiring to murder and disposing of the body to conceal the cause of death. They were brought to a rented house and abandoned pier to re-enact the crime on Wednesday afternoon.

A source said the victim’s other relatives earlier on Thursday morning performed a ritual to bring the girl’s spirit home at the spot where the body was found before they went to submit papers at the Bang Saothong police station in order to collect her body for a funeral.