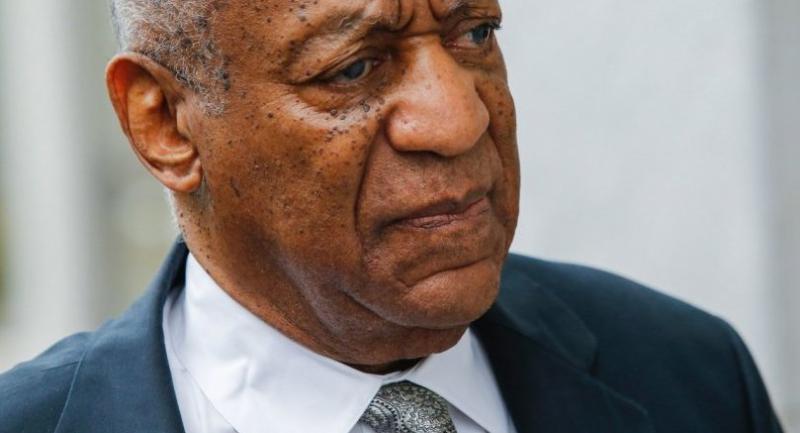 Bill Cosby arrives on the sixth day of jury deliberations of his sexual assault trial at the Montgomery County Courthouse on June 17, 2017 in Norristown, Pennsylvania.// AFP PHOTO / EDUARDO MUNOZ ALVAREZ

NORRISTOWN, United States - A US judge declared a mistrial Saturday in Bill Cosby's sexual assault case with the jury deadlocked on whether the disgraced star drugged and molested a woman in 2004, as prosecutors vowed to seek a retrial.

It was a stunning development -- and a momentary victory -- for the 79-year-old pioneering black entertainer who risked spending the rest of his life in prison if convicted of assaulting former university employee Andrea Constand at his Philadelphia home 13 years ago.

Prosecutors pledged to pursue a conviction, raising the prospect that the now frail and isolated comedian, once adored by millions as "America's Dad" but his career now in tatters, would be forced to return to court in a matter of months.

The trial has irrevocably damaged the legacy of Cosby, once a towering figure in US popular culture best known for his seminal role as a lovable father and obstetrician on hit 1984-92 TV series "The Cosby Show."

Free on a $1 million bail, Cosby -- who says he is legally blind -- hung his head and made no comment before leaving the court in the Philadelphia suburb of Norristown, escorted by his representatives.

Around 60 women have publicly accused the Emmy-winning actor in recent years of being a serial sexual predator, alleging that he drugged and assaulted them over a span of 40 years across the United States.

But Constand's allegations were the only criminal case brought against him as most of the alleged abuse happened too long ago to prosecute.

Her case was initially settled by a civil suit but re-opened in 2015, when Pennsylvania prosecutors claimed that new evidence had come to light.

'We're going to retry the case'

"There was no pause or hesitation about that, and we're moving forward," he told reporters.

Steele admitted he was "disappointed" but said his team would review their case and make tweaks. He pledged the three counts of aggravated indecent assault would stand and praised Constand's "courage."

Constand said the trial had "given a voice to the many victims who felt powerless and silenced."

"We commend those prosecutors who raised awareness that one of the hallmarks of drug-related sexual assaults is the effect the drug has on the victim's memory and ability to recall and were nonetheless willing to present this evidence to the jury," she said in a statement that her attorneys released to US media.

The sequestered seven-man, five-woman panel spent 52 hours deliberating, working late into the night and on Saturday, longer than the six business days devoted to testimony and legal arguments.

They first informed Judge Steven O'Neill on Thursday that they were deadlocked, but were instructed to keep trying.

Less than 48 hours later, the panel informed the judge that they were still deadlocked on all three counts.

"We came here looking for an acquittal, but like that Rolling Stones song says, 'You don't always get what you want, sometimes you get what you need,'" defense lawyer Brian McMonagle told reporters.

Legal experts had always warned that the "he said, she said" nature of the case was going to be difficult to prove in court, not least because it happened so long ago and lacked physical evidence.

Cosby's wife, Camille, who attended just one day of the trial, issued a fierce statement on Saturday, read out by a representative.

She condemned the district attorney as "heinously and exploitatively ambitious," the judge as "overtly arrogant," lawyers for the accusers as "totally unethical" and "many" in the media as "blatantly vicious."

'Nobody is above the law'

Cosby did not testify and the defense spent just minutes presenting their case, calling one witness and arguing that the evidence just did not exist to convict their client.

The prosecution spent five days painstakingly trying to build their case, calling Constand and her mother to the stand, as well as another woman who alleged that Cosby also drugged and assaulted her in Bel Air in 1996.

Cosby, who was lauded as a hero by African Americans and revered by whites for smashing through racial barriers over a five-decade career, is best remembered for his role as Cliff Huxtable on "The Cosby Show."

One of the most popular television series in history, it propelled Cosby -- a man raised by a maid and a US Navy cook -- into a life of fame and wealth.

At the time of the alleged assault, Constand was the director of women's basketball at Temple University, where the actor sat on the board of trustees.

She said the incident left her "humiliated" by someone she had thought of as a friend and mentor.

Cosby maintained in a 2005 deposition that he gave Constand the antihistamine Benadryl to relieve stress and had consensual relations. But he admitted obtaining sedatives with a view to having sex.

It was unclear how the jury was split. A retrial must take place within a year, but O'Neill said he wanted it to happen within 120 days.

Steele dismissed any criticism of the cost involved, saying "You can't put a price tag on justice."

"Nobody is above the law," he said.