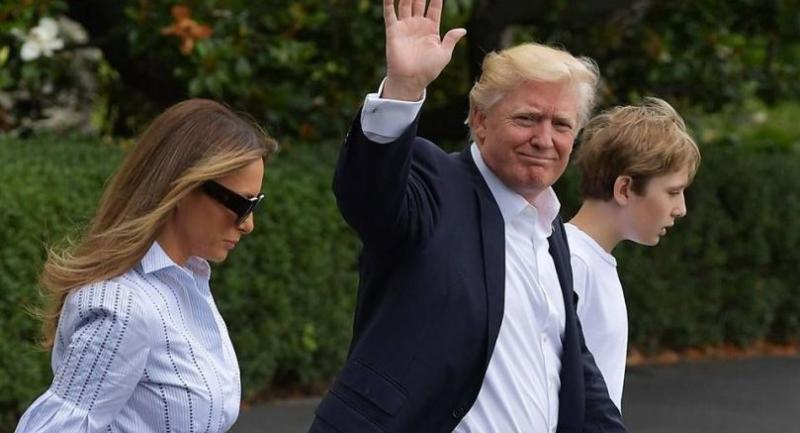 US President Donald Trump, First Lady Melania Trump, and son Barron make their way to board Marine One on the South Lawn of the White House on June 17, 2017 in Norristown, Pennsylvania. / AFP

WASHINGTON - US President Donald Trump early Sunday morning hurled a series of testy tweets defending his crisis-ridden presidency, once again decrying the "witch hunt" against him.

"The MAKE AMERICA GREAT AGAIN agenda is doing very well despite the distraction of the Witch Hunt," the Republican leader tweeted while away on his first weekend to Camp David, the official US presidential retreat in the mountains of western Maryland.

"Many new jobs, high business enthusiasm," he wrote Sunday, also pointing to his successful nomination of conservative justice Neil Gorsuch to the top US court.

"Infrastructure, Healthcare and Tax cuts in the works!" he continued.

Sunday's tweets followed Trump's furious Twitter outburst on Friday in which he announced he is under investigation in connection with a probe into alleged Russian election meddling that has dogged the administration and gained steam in recent weeks.

A source on Trump's legal team claimed the president was referring to a Washington Post story "from the other night" rather than confirming he is being investigated.

The daily was one of several media that reported that Trump himself is being investigated on allegations of obstructing justice.

Trump is accused of firing FBI director James Comey over his refusal to steer the Russia investigation away from former national security advisor and Trump ally Mike Flynn.

The US president has denied trying to influence the investigation, but has acknowledged in an interview that Russia was on his mind when he dismissed Comey.

Trump left Saturday with his wife and young son to spend the weekend at Camp David for the first time, and is scheduled to return to Washington late Sunday.