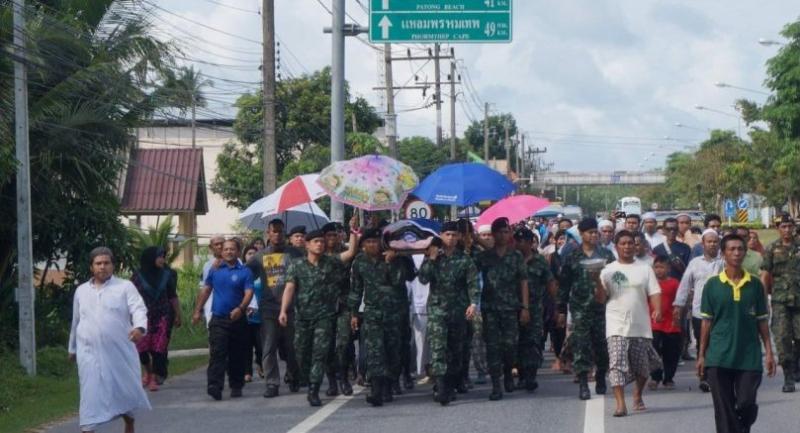 Pvt Kittipong was buried this morning, with an Islamic ceremony at Baan Bangduk in Maikhao.

PHUKET: At 11:30am on Monday, a car bomb in Pattani province killed 6 soldiers, including a Phuket man whose body arrived here late last night.

Phuket Vice Governor Sanit Sriwihok and related officials honored the arrival of the body of Pvt Kittipong Bornar, 23, which traveled by car in a parade to honor the hero.

“I feel deep sorrow for our family's loss, but am so proud of my son to have served our nation,” said Mr Prasong Bornar, father of Pvt Kittipong,

Sukanya Patan, wife of Pvt Kittipong, noted that at 10 am on June 19, just two hours before the bomb that killed him, her husband had made a video call to her and said how much he missed her and their son.

“Pvt Kittipong had said that in a few days he would come to Phuket to celebrate Hari Raya with the family. So when I was informed that he had died, I was overwhelmed. He was a good man and I never thought that he would pass away early. However, I am immensely proud of him,” said Mrs Sukanya.

Pvt Kittipong was buried Tuesday morning, with an Islamic ceremony at Baan Bangduk in Maikhao.

The family will receive government compensation ofBt 2 million. And his rank will be upgraded posthumously to Sergeant Major First Class (SM1).