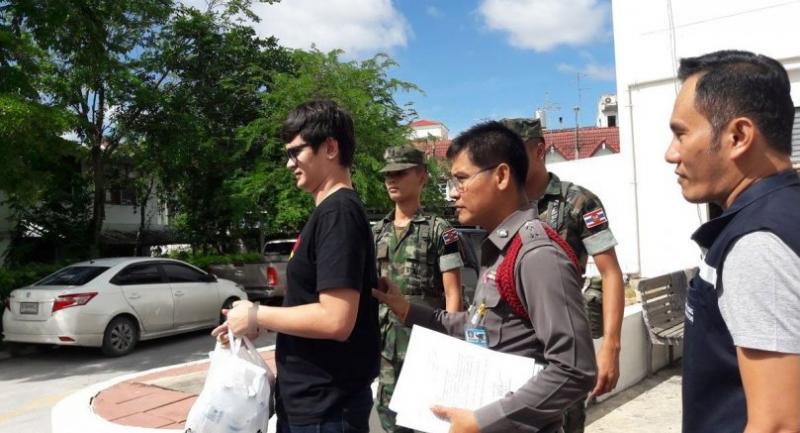 Anti-junta activist Rangsiman Rome was brought to the Military Court on Monday morning and prosecuted for alleged violations of the referendum law and the junta ban on political gatherings.

The activist was arrested on Sunday, shortly before he was scheduled to speak at a pro-democracy event, “Start Up People”, and was detained overnight at the Bang Sao Thong Police Station.

He planned to submit on Monday a petition to ask the government to reveal information in regards to the Thai-Chinese railway project at Government House. Rome believed that he was intercepted probably because of this move.

According to Thai Lawyers for Human Rights, who are assisting Rangsiman with the case, the officers issued him with an warrant issued last August, which ordered him to see prosecutors regarding his alleged violations against the junta’s order on political gatherings.

Rangsiman’s refusal to meet with prosecutors, due to his belief he had not broken any law, might might have resulted in the arrest warrant being issued, the lawyers group noted.

But it is unclear as to why August’s warrant was used on Monday, the group added.

Police said Rangsiman was arrested for breaking referendum law by disseminating leaflets in campaigning against the Constitution during the referendum last year.

On Monday morning, the activist was taken to the military court and was also prosecuted for violating the political gathering ban in 2015, when he and his colleagues staged a symbolic activity marking the coup anniversary, according to the Democracy Restoration Group’s facebook.

Rome has not been taken to Bangkok Remand Prison, and he has not decided whether to apply for bail.