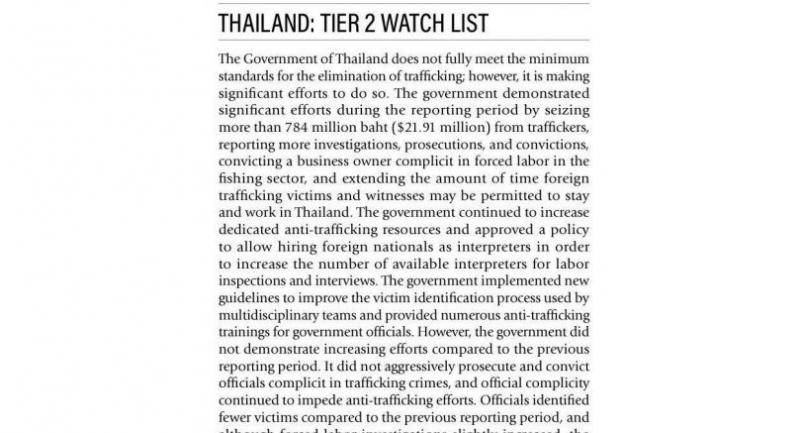 Thailand continued to be in the Tier 2 Watch List in the 2017 Trafficking in Persons report, as the Thai government had not fully meet the minimum standards for the elimination of trafficking, the US State Department said.

Though the Kingdom maintained the same status as last year, the report said the Thai government had demonstrated significant efforts during the reporting period.

The authorities had seized more than Bt784 million from traffickers, reported more investigations, prosecutions, and convictions, convicted a business owner complicit in forced labour in the fishing sector, and extended the amount of time foreign trafficking victims and witnesses were permitted to stay and work in Thailand, it said.

However, the government did not demonstrate increased efforts compared to the previous reporting period, it said.

It did not aggressively prosecute and convict officials complicit in trafficking crimes, and official complicity continued to impede anti-trafficking efforts, the report added.

Prime Minister Prayut Chan-o-cha had said earlier that it did not matter what Thailand’s rating was, but his government would continue combating human trafficking as it was on the national agenda.