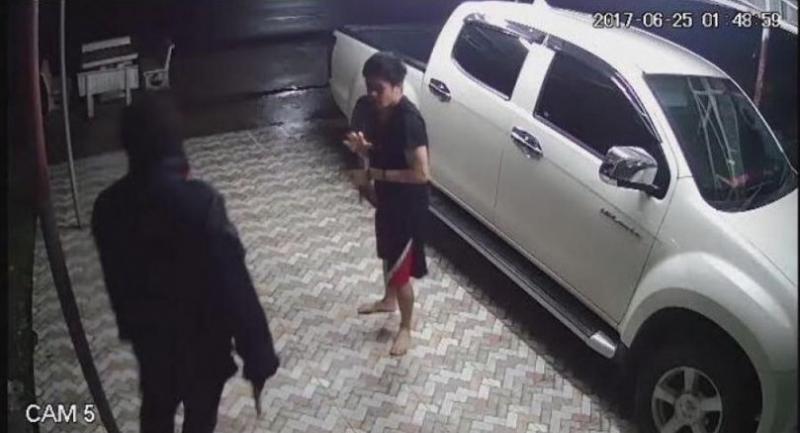 Footage from the victim's own CCTV system confirms the violent crimes beyond a doubt. Photo: Kritsada Muenhawong

PHANG NGA: Police are hunting for two men who used an M16 machine gun in a failed attempt to rob a snooker hall in Phang-nga on Monday night.

The 35-year-old owner, who refuses to be named, filed a complaint about the attempted robbery with the police in Phang-nga Town yesterday morning, along with evidence from CCTV footage.

The footage shows that the two men, covered in full face masks, threatened and abused the victim, who fought back and refused to part with any of his valuables.

“It happened when I was closing the entrance door to my place. There was one man wearing a blue jacket with a mask covering his whole face. He had a shot gun and demanded my valuables but I wouldn't let him take them,” he said.

“Then another man, wearing a black jacket with the same kind of mask, appeared and used the stock of an M16 to smash me hard over the head, causing me to bleed,” he said.

“Both of them were frightened by my yelling for help from my neighbors. They quickly searched through my drawers but couldn't find anything valuable. Then they left and drove away in a black Mazda without license plates. They also unplugged and took my CCTV camera before they fled,” the victim continued.

“Luckily, the CCTV's recording media is not in the camera itself, so I got everything. So I took it all as evidence to the police and for the media there at the station,” he added.

Phang-nga police are still hunting for the perpetrators and say they will charge them with assault, battery and attempted armed robbery when found.