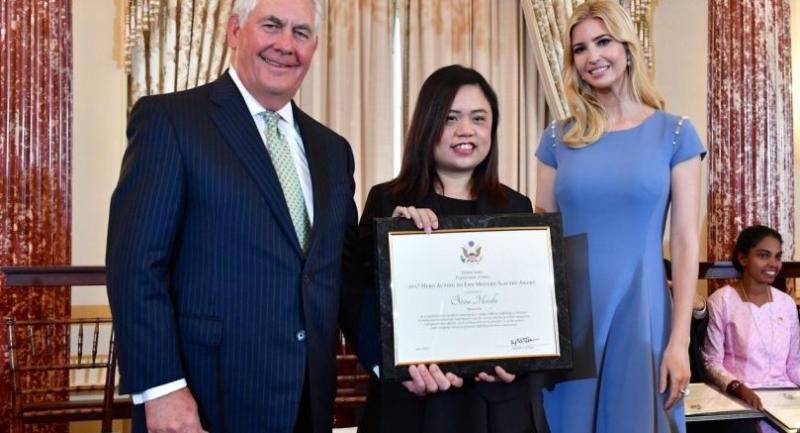 Wirawan “Boom” Mosby, founder and director of the Hug Project in Chiang Mai province, has been honoured as a “Trafficking in Person Hero” by the US State Department for her work against human trafficking.

The honour came with the release of the department’s 2017 Tip report, which held Thailand on the Tier 2 Watch List as it considered that the Thai government does not fully meet the minimum standards for the elimination of trafficking, although it is making significant efforts.

The report praised Wirawan as a passionate advocate for child victims of sexual abuse in Thailand who has been instrumental in the advancement of a victim-centred approach in Thai antitrafficking efforts.

Wirawan joined other Tip heroes to receive the award in a ceremony in Washington and was chosen to represent other heroes by giving a speech. She told the audience how great His Majesty the late King Bhumibol Adulyadej was and that he was like a “Father of the Nation.” She praised the King’s dedication to helping fight poverty and hardship among Thai people.

According to VOA Thai radio, she said the international community and leaders could follow in the King’s footsteps in helping people. The ceremony was attended by US Secretary of State Rex Tillerson and White House senior adviser Ivanka Trump.

Each year, the State Department honours individuals from around the world who have devoted their lives to the fight against human trafficking.

In an interview with the VOA, Wirawan said that Thailand’s status on the Tier 2 Watch List showed that problems still exist but it has improved from two years ago when the country was listed in Tier 3, the bottom ranking.

Thailand should continue solving human trafficking problems with determination to help victims and risk groups, rather than focus on the ranking, she said.

The Hug project website said that “hug” is a northern Thai word that means “love”. The word is also an acronym that stands for hope, understanding and grace.

Wirawan’s early work with the project included a partnership with police to provide educational and support services for at risk children in Chiang Mai. As her involvement with child trafficking investigations deepened, she developed key relationships with law enforcement, government officials and NGO partners, establishing a network of resources and support for child victims.

In 2015, she played a fundamental role in opening the Advocacy Centre for Children Thailand in Chiang Mai, the first child advocacy centre in all of Southeast Asia. Under her leadership, the centre has supported more than 81 investigations and the arrest of more than 20 perpetrators.

In 2016, she joined the Thailand Internet Crimes Against Children Task Force.