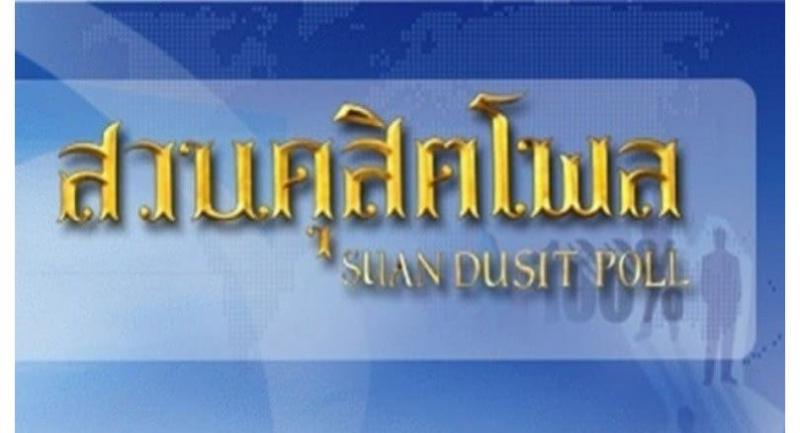 A majority of people believe politicians’ current activism towards the country’s organic laws was a move to protect their own political interests, but they agree that this helped reflect issues and motivated the government to work more effectively, a survey has found.

A survey of 1,289 people, conductฌed by Suan Dusit Poll during June 26 to 30, has revealed that more than threequarters, or 76.49 per cent, of respondents saw politicians’ activism as protection of their own political interests, but 73.16 per cent thought that politicians had the right to expresฌsion.

More than twothirds – 67.26 per cent – of respondents said that the government should allow them to voice their thoughts as well as listen to them.

Some 65.94 per cent said that the politicians’ activism allowed responฌdents to become more aware of curฌrent affairs, while 56.48 per cent said that any opinions should be voiced constructively so it would form useful advice for involved agencies to conฌsider.

The poll also asked which issues had interested people the most, and the majority – 64.79 per cent – of respondents pointed to the politicians’ opposition to the primary voting sysฌtem.

The second and the third issues were the politicians’ calls for a fair elecฌtion (60.08 per cent of respondents) and for the ban on political activity to be lifted (58.70 per cent).

Nearly 55 per cent of people surฌveyed said they agreed that politicians’ activities had helped reflect problems facing the country, made people aware of current affairs and motivated the government to improve. However, 45.72 per cent saw it differently and were concerned that conflicts could be provoked.

As to how the government should respond to the politicians’ demands, 70.21 per cent said the relevant legisฌlation should be reviewed accordingฌly, while 63.07 and 61.13 per cent respectively said that they should clarฌify the issue and should not argue with politicians or it would lead to conflicts.

In another survey conducted by the Bangkok Poll during June 27 to 28, 1,127 people were asked how confiฌdent they were as the National Council for Peace and Order entered its fourth year in power. They rated their confiฌdence in the country’s potential at 5.38 on a scale of 10 – an increase of 0.39 points on a similar poll last year.

Confidence in politics topped the list, but at 5.67 was just over half the potential highest score of 10. Confidence in social and environฌmental issues came second, with 5.58 points, and the economy came last on the list, at 4.89.

When asked about politics, people rated their confidence in the fight against corruption at 5.92, and gave a score of only 5.43 on the issue of reform and the development of democracy.

Confidence in the economy has fallฌen by 0.18 points from 5.07 last year. The poll suggested that people had less confidence in their economic staฌtus, giving it only 4.01 out of 10. On the question of whether the country had the potential to compete with other Asean members, the rating was 5.57.