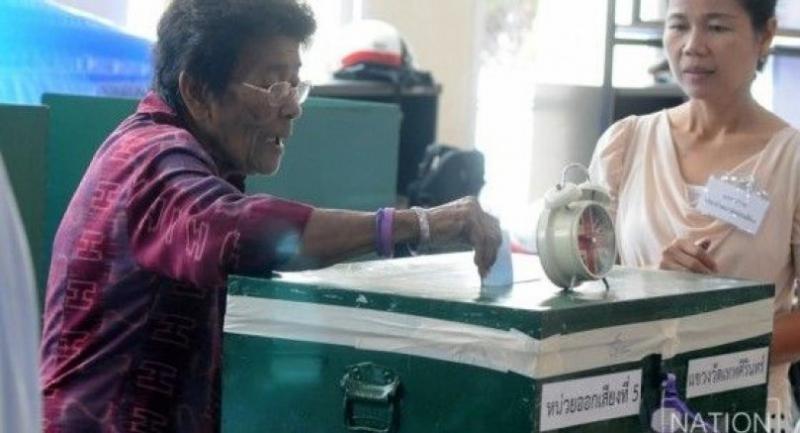 GENERAL Somjet Boomthanom, in his capacity as chair of the law-vetting committee, keeps asking them to focus on the fundamental principle so that they can come to terms with the newly introduced primary election system. They said they agree, but still are hesitant to immediately accept it, citing all the technical problems that will emerge following the introduction of the system.

“Is this not a system that will help pave the way for democracy that you long wish for, as politicians?” asked Somjet. “It is, isn’t it? So, I beg you to not hate it, but rather embrace it and tolerate some difficulties along the way, so we will help each other rebuild democracy here again.”

The primary voting system has become a buzzword over the past few weeks since Somjet’s committee proposed the amendment of the political party draft bill to the National Legislative Assembly (NLA), which later passed it in its second and third readings.

Since the bill was passed, the system, which was introduced under the amended bill, has triggered heated debates and caused rifts among concerned parties over both ideology and practicality.

The system, very new here, has long been implemented in mature democratic countries such as the United States.

As explained by Somjet’s committee, it’s a system under which, for the first time here, political party members would have a chance to select MP candidates via a primary election held at party branches or by party representatives in provinces nationwide.

Afterwards, the list of primarily elected MP candidates would be sent to parties’ executive committees to finalise, rather than letting them choose those candidates in the first place, as has been done here for decades. For the party list, although party executive committees would have the chance first to line up candidates, the list would be sent down to party branches to vote and then sent back to them for finalisation, based on votes given.

Those concerned about political reform are divided, although it’s hard for them to disagree that this is decentralisation of power, a basic principle of democracy. This is because practicality is still a big question, considering the country’s current political infrastructure.

Those who have thrown their support behind the system include Somjet’s committee and the NLA, which backed his proposal up, plus the Election Commission, which affirms that despite some difficulties in holding such an election, the organisation would try every means to get the work done.

More importantly, this is totally constitutional, and has no more room left for interpretation.

The other side, however, still has doubts, especially on the practicality of the system. Surprisingly, they are the bill drafters themselves – members of the Constitution Drafting Commission who removed it from the bill they submitted to the NLA for deliberation.

Most politicians and parties, of course, back it up.

Two heavyweights from the Democrat Party and Pheu Thai, Abhisit Vejjajiva and Chaturon Chaisang, chorus in disagreement with the introduction of the system, though they cannot ignore its democratic principle.

Democrat leader Abhisit is concerned that political parties, with limited time to prepare themselves for the coming election, would not be able to hold a primary election, as they must have party branches in place as a pre-condition.

This would be particularly true for small parties, he added.

Chaturon goes beyond that observation. He is concerned that parties would become divided, thus going against the will to strengthen political institutions.

The system, he points out, would stir fierce competition in party branches. Where party branches have a relatively small number of members, heavy lobbying would occur at that level, thus political domination would be even more rampant.

Charter drafter Meechai Ruchupan agrees with them as he ponders the technicalities of holding such an election within the limited timeframe given. As this would be a pre-condition for a nationwide election, it would pose further difficulties, he pointed out.

Election Commissioner Somchai Srisutthiyakorn, on the other hand, insists that any technical difficulties that may arise should be something that the concerned parties help each other overcome.

What is most important, he added, is that the system has helped fulfil the ideology that people will be participating in politics, and that is fundamental to democracy.

As noted political scientist Asdang Panikbutra suggests, some adjustment is required for the system so that it better fits the current political structure. But to boost people’s political awareness, they must be encouraged to engage more in party business. This system, as he views it, is the right start.

“To be political active, participation is a critical way,” the political scientist notes.

There is one week left before the concerned parties decide whether to officially oppose the endorsed draft bill. If that is the case, a joint law-review committee would be set up to look at their disagreements – and to decide the fate of the primary voting system.