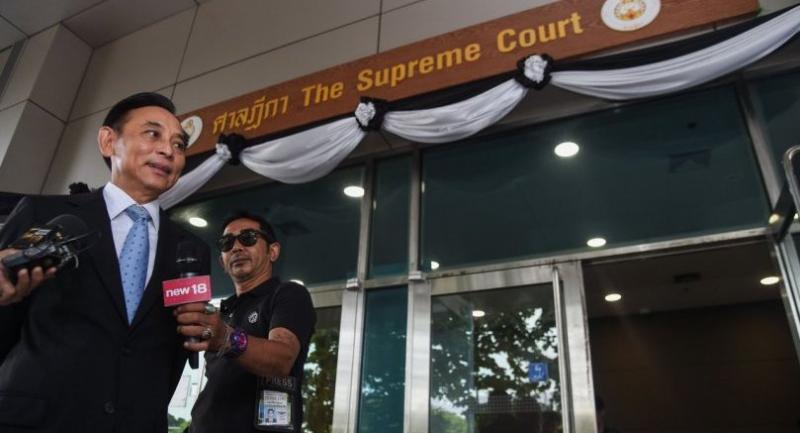 THE VERDICT in a criminal case against former commerce minister Boonsong Teriyapirom, stemming from the previous government’s alleged rice-pledging scheme, will be delivered on August 25, the Supreme Court’s Criminal Division for Political Office Holders has announced.

Boonsong and 27 others have been charged with malfeasance or condoning irregularity in the alleged bogus government-to-government deals to sell 6.2 million tonnes of rice, worth more than Bt20 billion, to China.

Other defendants include former state officials and executives of private companies.

The case was brought to court by the Attorney General’s Office.

The court yesterday scheduled a reading of its verdict in the case at 9am on August 25. It also instructed both the prosecution and the defence to submit their written closing statements by August 15.

Boonsong, who came to the court yesterday, said he had explained everything he was supposed to explain and was confident that the court would heed his arguments.

“I believe that justice will be served,” he said.

Boonsong, his former deputy Poom Sarapol, and three former senior Commerce Ministry permanent officials have been held responsible for allegedly faking rice deals during the tenure of the Yingluck Shinawatra government. That government executed the country’s biggest ever rice-pledging scheme, which resulted in an estimated loss to the state of over Bt500 billion.

The Yingluck government implemented a massive rice-pledging scheme to buy an unlimited quantity of rice from farmers at Bt15,000 per tonne, compared to the then-prevailing market price of Bt7,000 to 8,000 per tonne.

Bogus rice deals were then used to show that the government was able to export a significant amount of rice to reduce its financial burden. It was later found, however, that the deals were in fact domestic rice transactions carried out by Siam Indica and other private firms.

A huge number of people, including many of her admirers, are expected to turn out to show their support for Yingluck on the last day of her trial.

The Supreme Court’s Criminal Division for Holders of Political Positions has scheduled two more hearings in the case – the first for tomorrow and the final hearing on July 21.

Yingluck, as head of the previous government, has been charged with negligence for the massive corruption involving her administration’s project. She could face a lengthy jail term if found guilty.

She also faces an executive order for her to pay civil compensation of Bt35 billion for causing losses to the state as a result of her government’s policy.

Army commander-in-chief General Chalermchai Sitthisart said on Tuesday that public order would be maintained by sending troops in addition to the police officers who are normally in charge of security at the court.

“If they want to hold any activities or protest, they need to seek permission from the agencies concerned,” the Army chief said.

“But if they just want to show up to give moral support, they should know how to behave to avoid any conflict,” he added.